Suburban Rites of Passage: Building, Landscape, and the Mediation of Adolescent Aggression 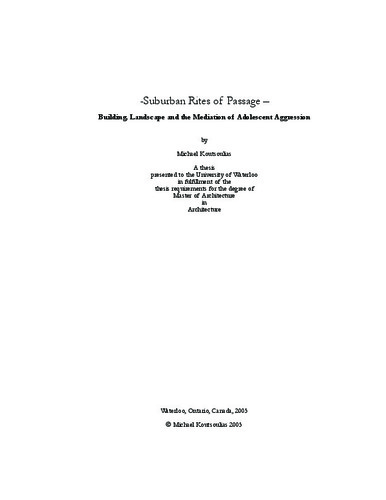 This thesis questions contemporary society?s understanding and ability to deal with the universal instinct known as aggression. The investigation identifies the driving forces behind adolescent aggression and the myth based rituals and cultural devices used to mediate it. The primary case in this study is a suburban community called Malvern, known for its high rate of teen violence and aggressive acts. Malvern is evaluated based on its current rites of passage rituals and institutions used for the socialisation and individuation of the young members of its community. This is followed by a proposed intervention introducing the use of building and landscape as devices to mediate adolescent aggression through the emergence of redefined myth based rituals and rites of passage within Malvern?s unique context.