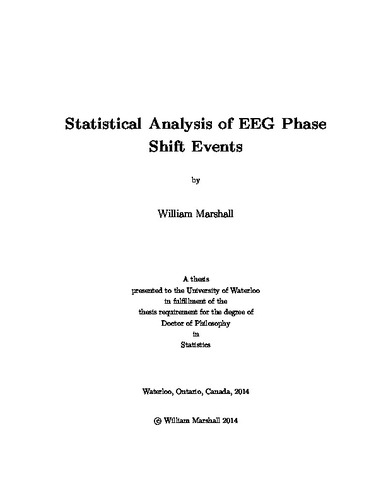 This thesis develops statistical methods for the identification, and analysis of phase shift events, i.e. sudden changes in the timing relationship between coupled oscillators. Phase shifts events occur in many complex systems but here the primary interest is the analysis of electroencephalogram (EEG) recordings where they have been identified as markers of information transmission in the brain; as a secondary example we analyze systems of weakly coupled Rossler attractors. The main result, found in Chapter 2, is a novel method for estimating neural connectivity from EEG recordings based on spatio-temporal patterns of phase shift events. Phase shift events are modelled as a multivariate point process, and the ideas of Granger causality are used to motivate a directed measure of connectivity. The method is demonstrated on EEG recordings from 18 participants during three task conditions; resting, visual vigilance and auditory vigilance. Likelihood ratios are used to test the hypothesis of no Granger causal interaction between signals, and network patterns are analyzed using graph theory. In Chapter 3 the problem of phase shift identification is formulated as a change point in the instantaneous phase. Two estimators are considered, based on the cumulative summation and the instantaneous phase derivative. Block bootstrapping techniques are used to capture the dependency structure in the signals and determine critical values for shift identification. Estimators are evaluated both on their accuracy, and temporal resolution. Finally, detailed simulation studies are performed using realistic head models to investigate the effect of volume conduction (linear spread of electrical activity at the scalp) on phase shift analysis. Specifically, Chapter 4 investigates the effect of volume conduction on the analysis, in order to understand the limitations of the phase shift Granger causality method. Chapter 5 then investigates an approach for reducing the effect of volume conduction by using EEG source reconstruction techniques to estimate neural source activity and then identifying phase shifts with-in the brain directly from the reconstructed sources. The primary impact is the novel method for estimating neural connectivity. Each chapter investigates a different aspect of EEG phase analysis, and together they form a complete package for estimation and interpretation of neural connectivity. Two other areas of impact are in statistical change point analysis, and behavioural psychology.