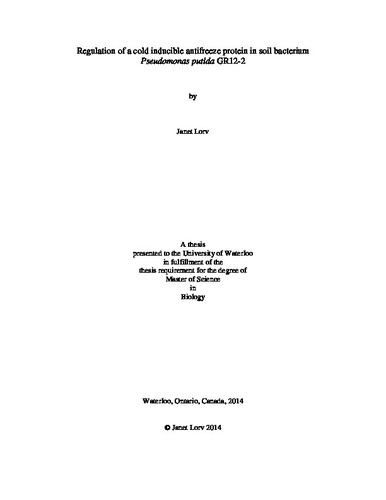 In cold inhabiting bacteria, a commonly used strategy to combat freezing stress is the production of antifreeze proteins. These proteins assist in survival below 0 degrees Celsius by minimizing extracellular ice crystal growth. With a temperature dependent activity, these proteins are regulated by changes in ambient temperature. In the soil bacterium Pseudomonas putida GR12-2, expression of antifreeze protein AfpA was previously observed to be regulated by cold induction at 5 degrees Celsius. To better understand how this antifreeze protein helps with low temperature survival, I investigated AfpA regulation at multiple levels. Transcriptional regulation of this protein was investigated by studying the DNA upstream of the antifreeze gene. Within this region, an RpoD promoter with a CspA regulation element was found. Using an indirect luciferase reporter gene assay, the afpA promoter was found to be most active during exponential growth under optimal conditions. From these results, temperature dependent regulation was determined to be at the posttranscriptional level. At this level, I determined that AfpA expression was likely regulated by formation of different RNA structures. From a phylogenetic analysis, I also determined that afpA may be regulated as an operon with multiple promoters that can individually regulate each gene. Aside from temperature dependent regulation, I further characterized AfpA. This protein was identified to have ice recrystallization inhibition activity, a putative ice binding site and is likely secreted by a type I secretion system.