Marriage and the Social Contract in British Romantic Discourse 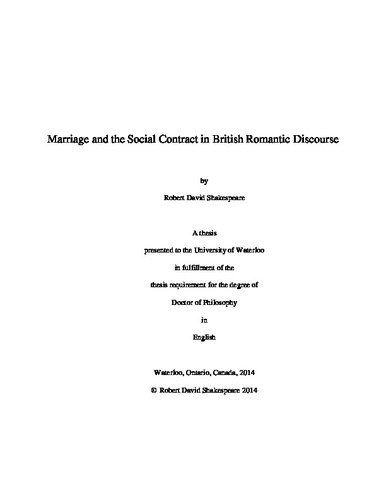 This thesis investigates non-domestic discourses of British Romanticism to argue that there is no “outside” of the domestic; its key constituents, family and the marriage that legitimizes that family, are absent presences in the period’s political writings, philosophical poetry, and gothic fiction. A central occupation in the thesis is an analysis of the significance that the wedding ceremony has on cultural, political, and textual levels. Following the Marriage Act of 1753, marriages would only be recognized as legal if they followed the state’s prescriptions, among which were the requirements for parental consent, public banns read for three consecutive weeks prior to the wedding, and authorization of the marriage by an officially licensed clergyman. The increased state control over what constitutes a valid marriage invites the parallel I draw between the marriage contract and the social contract, supported by the conventional analogy between family and state. My argument positions marriage and family as among the most overlooked ideas in Romantic-era discourse because of the rhetorical sublimations, transpositions, and narrative delays of literal marriage. In my first chapter, I investigate political texts of the period, chiefly Reflections on the Revolution in France by Edmund Burke and Rights of Man by Thomas Paine. My second chapter investigates the substitutions and displacements of literal marriage in texts by William Wordsworth and Lord Byron. Two major gothic novels of the 1790s, Matthew Lewis’s The Monk and Ann Radcliffe’s The Italian, represent variations of the interrupted wedding ceremony in my third chapter, and I close with a conclusion featuring the novels of Jane Austen. I argue that remarriage constitutes a key to understanding representations of marriages that occur after the Marriage Act of 1753: remarriage to the same person is a way for couples to ensure that their vows are more personally meaningful, and, through repeated iterations, more significant than the legal mechanisms required by the state. If the analogy between the state and the family is conventional, then this conclusion has a potential application to political theories that consider the renewal of popular consent necessary to the validity of a government.