Towards a Versatile System for the Visual Recognition of Surface Defects 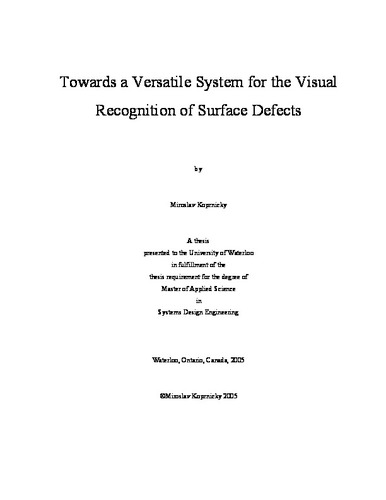 Automated visual inspection is an emerging multi-disciplinary field with many challenges; it combines different aspects of computer vision, pattern recognition, automation, and control systems. There does not exist a large body of work dedicated to the design of generalized visual inspection systems; that is, those that might easily be made applicable to different product types. This is an important oversight, in that many improvements in design and implementation times, as well as costs, might be realized with a system that could easily be made to function in different production environments. <br /><br /> This thesis proposes a framework for generalizing and automating the design of the defect classification stage of an automated visual inspection system. It involves using an expandable set of features which are optimized along with the classifier operating on them in order to adapt to the application at hand. The particular implementation explored involves optimizing the feature set in disjoint sets logically grouped by feature type to keep search spaces reasonable. Operator input is kept at a minimum throughout this customization process, since it is limited only to those cases in which the existing feature library cannot adequately delineate the classes at hand, at which time new features (or pools) may have to be introduced by an engineer with experience in the domain. <br /><br /> Two novel methods are put forward which fit well within this framework: cluster-space and hybrid-space classifiers. They are compared in a series of tests against both standard benchmark classifiers, as well as mean and majority vote multi-classifiers, on feature sets comprised of just the logical feature subsets, as well as the entire feature sets formed by their union. The proposed classifiers as well as the benchmarks are optimized with both a progressive combinatorial approach and with an genetic algorithm. Experimentation was performed on true colour industrial lumber defect images, as well as binary hand-written digits. <br /><br /> Based on the experiments conducted in this work, it was found that the sequentially optimized multi hybrid-space methods are capable of matching the performances of the benchmark classifiers on the lumber data, with the exception of the mean-rule multi-classifiers, which dominated most experiments by approximately 3% in classification accuracy. The genetic algorithm optimized hybrid-space multi-classifier achieved best performance however; an accuracy of 79. 2%. <br /><br /> The numeral dataset results were less promising; the proposed methods could not equal benchmark performance. This is probably because the numeral feature-sets were much more conducive to good class separation, with standard benchmark accuracies approaching 95% not uncommon. This indicates that the cluster-space transform inherent to the proposed methods appear to be most useful in highly dependant or confusing feature-spaces, a hypothesis supported by the outstanding performance of the single hybrid-space classifier in the difficult texture feature subspace: 42. 6% accuracy, a 6% increase over the best benchmark performance. <br /><br /> The generalized framework proposed appears promising, because classifier performance over feature sets formed by the union of independently optimized feature subsets regularly met and exceeded those classifiers operating on feature sets formed by the optimization of the feature set in its entirety. This finding corroborates earlier work with similar results [3, 9], and is an aspect of pattern recognition that should be examined further.

Miroslav Koprnicky (2005). Towards a Versatile System for the Visual Recognition of Surface Defects. UWSpace. http://hdl.handle.net/10012/888