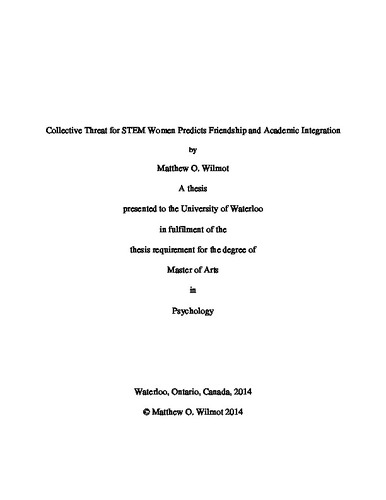 Members of stigmatized groups commonly confront collective threat: concerns that fellow group members' stereotypic behavior may reflect negatively on one's group and, by extension, oneself. If other ingroup members threaten the group's reputation, individuals may hesitate to affiliate with and integrate these ingroup members into their social and professional network. Two social network studies investigated how women in male-dominated STEM majors respond to a female target who possessed either STEM-stereotypic or nonstereotypic interests. Compared with two control groups - men in STEM and women in female-dominated (non-STEM majors) - women in STEM showed less willingness to affiliate and work with the STEM-nonstereotypic (vs. STEM-stereotypic) target, and to introduce her to their closest friends, especially when participants identified strongly with their major or held a low-brokerage (i.e., less influential) position within their network. These behavioural patterns have implications for understanding psychological mechanisms that underlie persistent friendship homophily and segregation between groups.