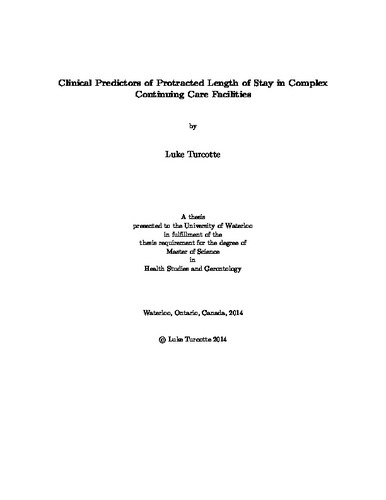 Purpose: The purpose of this research project was to describe the clinical characteristics of regular and long-stay Ontario CCC patients, identify a group of clinical characteristics available to care planners on admission that are predictive of delayed discharge from a CCC facility, and to determine CCC discharge barriers. In addition, analyses predicting discharge destination using admission characteristics were completed. Lastly, the psychometric performance of a new discharge planning algorithm designed for long-stay nursing home patients was also evaluated using this sample of Ontario CCC patients. Methods: This project was conducted using a secondary data analysis RAI MDS 2.0 admis- sion assessments from Ontario CCC patients admitted between 2001 and 2013. A total of 154,456 episodes of care were used in the analysis. Long-stay patients were identified as those belonging in the 95th percentile for length of stay. Analyses were completed in parallel for the overall sample and for 5 discharge setting based subsamples (community, residential care, expired in facility, acute care and other settings). Descriptive statistics for pertinent clinical variables were produced and group differences ascertained using Chi-square (χ2) tests. Multivariate binary logistic regression models were created to identify predictors of long-stay patient status. A nominal logistic regression model was created to identify predictors of discharge setting using admission characteristics. Lastly, the psychometric performance of the Q+ algorithm was assessed. Results: Numerous clinical characteristics were predictive of long-stay patient status in Ontario CCC facilities. Examples include young age, ADL impairment, aggression, a lack of clinical instability, increased pressure ulcer risk, increased social engagement, neurological diseases such as Alzheimer’s diseases and related dementias, Parkinson’s and multiple sclerosis, a lack of cancer diagnosis, tracheostomy, ventilator or respirator care, feeding tube, a lack of desire to return to the community and the lack of a support person in the community. Many of the same clinical characteristics also served as early predictors of discharge destination. The area under the curve for the Q+ algorithm predicting successful community discharge in the next 90 days was 0.73. At a threshold score of 12, the algorithm sensitivity was 0.67 and specificity was 0.68. Conclusions: The findings from this research project suggest that predictors of length of stay are complex, and that numerous patient attributes and process oriented variables, such as provision of therapies and treatments, are responsible for delayed discharged from Ontario CCC facilities. This research lays the groundwork for the development of risk-adjusted facility benchmark tools and decision-support tools for discharge planning.