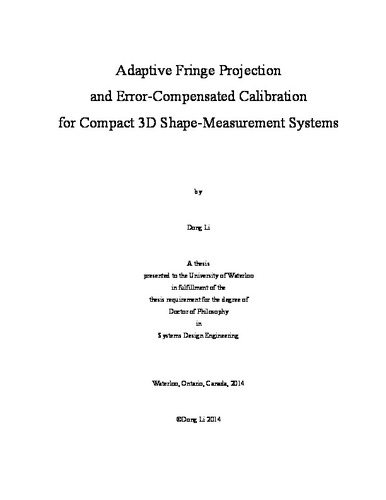 Measurement of the three-dimensional (3-D) shape of an object is needed for both industrial and consumer applications. In industrial applications, compact measurement systems are needed to accomplish certain tasks such as measuring an interior surface in a confined space. In consumer applications, compact measurement systems are also needed for common consumers to conveniently get access to 3D data for a wide range of everyday uses. Fringe-projection techniques have been increasingly used for 3D shape measurement due to the advantage of dense full-field measurement. For a camera-projector measurement system, system geometry (the relative camera-projector position and angle) determine the system compactness. Analysis of the relation of system geometry to measurement accuracy is challenging owing to the effect of the various factors that vary with system geometry on measurement accuracy. It is thus necessary to experimentally determine how measurement accuracy varies with system geometry, in order to determine the most compact design that satisfies a desired measurement accuracy. This has been achieved in a compactness study, in which the measurement accuracy is evaluated at different relative camera-projector positions and angles. Measurement results in the compactness study have shown that there is a tradeoff in loss of accuracy for increased compactness and loss of compactness for increased accuracy. The smallest camera-projector angle (for an industrial system) or the smallest physical distance between the camera and projector (for a consumer system) that satisfies the desired accuracy would provide the most compact design. Several new methods including 1) an improved heterodyne phase-unwrapping method, 2) an adaptive fringe-pattern projection (AFPP) method for surfaces of high variation in reflectivity and illumination, and 3) a pixel-wise adaptive fringe-pattern projection (PWAFPP) method for such surfaces, have been developed in this research to improve measurement accuracy, thus contributing to enable a more compact system design to achieve a desired measurement accuracy. First, the new improved heterodyne phase-unwrapping method detects and compensates for the spike-like errors in absolute phase maps. The method has demonstrated improved projector calibration accuracy from 18.2 to 0.2 pixels, thus ensuring usable camera-projector stereovision system calibration for 3D measurement. Second, the new AFPP method adapts the projector maximum input gray levels (MIGLs) to local surface reflectivity using only two prior fringe-pattern projection and image-capture rounds. The method demonstrated greatly improved 3D measurement accuracy by avoiding image saturation in highly-reflective surface regions while maintaining high intensity modulation of captured fringe patterns across the entire surface with large range in reflectivity. Third, the new PWAFPP method projects a MIGL adapted to the surface reflectivity and illuminance for each pixel. The method has demonstrated a 34% root-mean-square (RMS) error reduction in 3D measurement for pixels that remained saturated after applying the AFPP method. The new method can thus be used to measure surfaces with more complex variation in surface reflectivity.