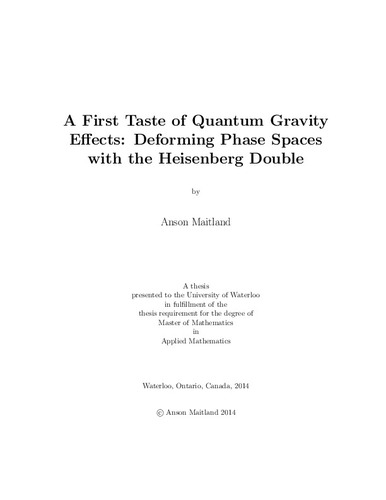 We present a well-defined framework to deform the phase spaces of classical particles. These new phase spaces, called Heisenberg doubles, provide a laboratory to probe the effects of quantum gravity. In particular, they allow us to equip momentum space with a non-abelian group structure by the introduction of a single deformation parameter. In order to connect Heisenberg doubles with classical phase spaces we begin with a review of Hamiltonian systems, symmetries and conservation laws in the classical framework. Next, we provide a comprehensive review of the theory behind Poisson-Lie groups, including Lie bialgebras and the construction of the Drinfeld double. Lastly, we build the Heisenberg double from Poisson-Lie group components. We then identify the Heisenberg double as a deformation of the cotangent bundle of Lie groups and extend many of the notions of classical Hamiltonian systems to this new picture with Poisson-Lie symmetries. As an example, we look at a new presentation of the deformed rotator.