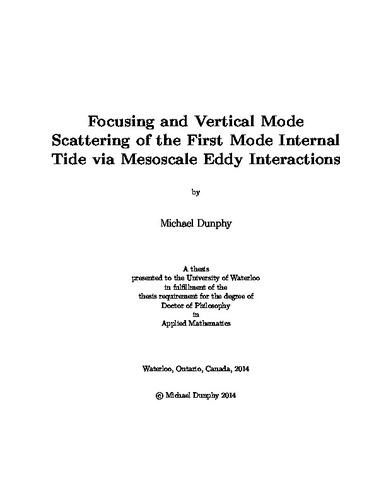 In this work we perform numerical experiments using the MITgcm to simulate the interaction of a mode-one internal tide with barotropic and baroclinic mode-one mesoscale eddies. We also employ the ray tracing equations to track mode-one and mode-two internal tides through barotropic eddies. Results show that barotropic eddies interact with a mode-one internal tide to produce beam-like regions of increased/decreased energy flux which we term hot/cold spots. The energy flux magnitude in the hot spots can reach twice that of the incident energy flux, while in the cold spots it can reach nearly zero. The interaction between a mode-one internal tide and mode-one baroclinic eddies results in the production of internal tides at modes two and higher. The generated waves emanate from the eddy in beam-like patterns. A novel energy budget technique is developed to measure the generation rate at each mode, finding that the energy supplied to the higher modes is extracted from the incident mode-one wave, and that the eddy does not exchange net energy with the waves. For the parameter regime explored here, up to 13 percent of the incident energy is scattered to the higher modes for eddies of diameter 120 km. The implication for the open ocean is an increase in vertical mixing local to mesoscale eddies, at the expense of reduced vertical mixing at remote coastlines. The vortex Rossby numbers are order one, corresponding to energetic mesoscale eddies found primarily in western boundary current extensions and in the southern ocean. We expect that these interactions will frequently form in locations where these phenomena coexist. Ray tracing mode-one and two internal tides through barotropic eddies yielded four classes of ray paths, two of which are bounded by caustics. We use a wave field reconstruction technique to synthesise MITgcm outputs for a suite of eddies ranging from mesoscale to basin scale, demonstrating the improvement of the synthesis as eddy size increases. While the results are poor for low-mode waves interacting with a mesoscale eddy, the technique is viable for higher mode waves or larger scale eddies.