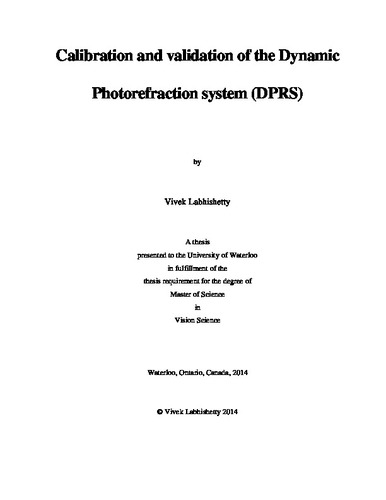 Introduction: Our group has been measuring accommodation in myopic children. The instrument of choice has been the Power Refractor (Multichannel Systems). However, this instrumentation is no longer supported and runs on an outdated platform (Windows 98). There is a need to develop a new photorefraction system that has the ability of the Power Refractor to accurately measure accommodation and its dynamic characteristics. The resolution of measures can be increased with modern video cameras especially in regards to the measurement of the first and second order dynamics of the accommodative response. Photorefraction is a rapid video based means to measure the refractive status of the eye. Light from infra-red LEDs set eccentric to the aperture of the camera is reflected back from the eye forming intensity gradients across the pupil that varies with the degree of ocular defocus relative to camera. However, this gradient can be influenced by various factors such as pupil size, fundus brightness etc. Thus the relationship between defocus and the intensity gradient must be calibrated empirically in order that valid measures of accommodation can be made from the photorefractor. Calibration trials determine a conversion factor which will be used to convert intensity gradients into diopters where other optical parameters such as pupil brightness and pupil size are controlled. Furthermore, once designed, this new instrument should be validated to see if it can accurately measure the ocular accommodative response and its dynamic characteristics.  Methods: Two calibration procedures were employed for conversion of the luminance slope in to units of diopters. First being the relative calibration where relative changes in the accommodation were induced and was related to the absolute changes showed in the luminance slope output from the photorefractor. Second, pupil size calibration was done to account for the changes in the pupil size where the conversion factor obtained from each subject was related to their respective luminance measure across the pupil (fundal brightness). For relative calibration, varying degree of ocular focus ranging from +5D to -5D (1D steps) was induced using trial lenses in-front of the right eye in which visible light was filtered out using an infra-red filter. Subjects (20-40 yrs.) fixated at a distance target with the other eye. Intensity gradients obtained in each condition were then plotted against the induced lens to get the linear regression slope value (conversion factor). This conversion factor was used later to convert the luminance output given by the photorefractor in to diopters. Repeatability measures were taken on 4 subjects (20-40 yrs.) on a different day. Bland-Altman plots were used to test the repeatability of conversion factor between the two visits. To address the inter-individual variability of the conversion factor, pupil size calibration was employed wherein fundus brightness was plotted against conversion factor and the linear regression equation of this plot was used to calculate the conversion factor. This procedure was used to account for changes in the pupil size during an accommodative response and thus to enhance the accuracy of the estimation. For validation, accommodation was stimulated using high contrast vertical line targets placed in a Badal optical system. A 2D step was provided with a 4sec presentation time and the onset of the stimulus was randomized. The video output obtained was loaded into DPRS for analysis. The raw position data obtained was further loaded in to MATLAB for analyzing the dynamics characteristics of the response using the velocity threshold criterion. Results: Calibration slopes of 12 subjects (29.16 ± 3.13 years) ranged from 1.77 to 3.41. Mean (±SD) slope obtained was 2.86±0.46. Bland-Altman plots showed a good repeatability of the conversion factor calculation between the visits for the four subjects (30.75 ± 4.11 years) with a coefficient of repeatability (Mean+1.96SD) of the slope values was 0.20 (≈0.05D). Fundus brightness showed a negative correlation with the calculated conversion factor across the subjects and then linear regression (y = -0.008x + 2.66; R2 = 0.73) was used to calculate the conversion factor. Validation was performed on 9 subjects (7 adults (29.57±2.69 years) and 2 children (11±1.4 years)). Conversion factors were obtained from all the subjects and it ranged from 1.48 to 2.08. Four out of nine subjects showed sluggish accommodative responses with an accommodative gain value less than 0.5. Bland-Altman plots showed good agreement between the DPRS (both individual and pupil size calibration) and the dynamic retinoscopy (mean deviation of 0.16D and 0.24D respectively). Individual calibration was slightly more accurate than the pupil size calibration and a mean deviation of 0.06D was noted between the two methods for estimating the defocus using the calculated conversion factors. Discussion: A new dynamic photorefraction along with an offline dynamic photorefraction system (DPRS) was calibrated and validated. Modifications done during this process made the system more robust with a linear operating range for a dioptric range of +5D to -5D. Photorefraction measures showed significant inter-individual variability in conversion factors as suggested previously (Schaeffel et al., 1993) with a good repeatability. In order to address the pupil size variability during a dynamic accommodative response and inter-individual variability of the conversion factors, the fundus brightness of the subjects were plotted against their respective conversion factors. The linear regression (y = -0.008x + 2.66; R2 = 0.73) was used to calculate the conversion factors directly from the fundal brightness. This procedure not only accounted for changes in the pupil size but also for calculation of conversion factors directly. Further, the system was validated on nine subjects and the responses obtained were in agreement with the previous literature on accommodation dynamics (Campbell et al., 1960; Tucker et al., 1979; Suryakumar et al., 2005). Bland-Altman plots showed agreement between the DPRS and the gold standard dynamic retinoscopy with a clinically insignificant mean deviation in the accommodative gain estimation between the methods.