A Search for Nearby Dwarf Galaxies 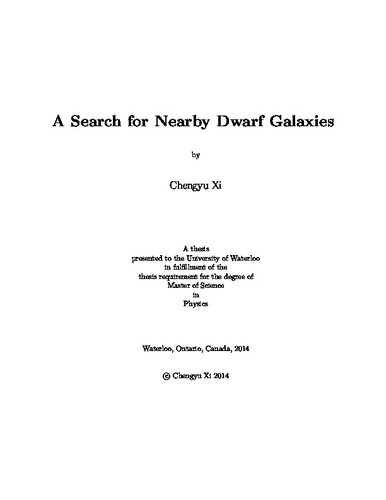 Dwarf galaxies can be used to trace invisible dark matter substructure. Studies of the properties of dwarf galaxy populations are crucial in solving the so-called ``Missing Satellite Problem'', and hold important implications for galaxy formation. We use data from the COSMOS survey to study the statistical properties of nearby satellite galaxies, including their clustering, spatial distribution and abundance as a function of the luminosity relative to the central galaxies. The COSMOS data have 30-band photometric redshifts of very high quality, which greatly help our measurements. We detect an over-density of galaxies at projected separation < 600 kpc, corresponding to 7.9 +/- 0.5 satellites per central galaxy. We also measure the relative abundance of satellites as a function of the magnitude difference between satellites and central galaxies, the so-called ``relative luminosity function''. After correcting for the variation of the magnitude limits for different primaries, we find a detection of 17.7 +/- 5.1 satellites per central galaxy at Delta m_g = g^{+}(sat) -g^{+}(main) <=10. This result is two magnitudes fainter than most of the recent studies. This result is of two magnitudes less deep than the result of Speller & Taylor (2014), but is much more complete at the faint end, as we include the compact and low surface brightness galaxies that are excluded in their work. Additionally, we investigate satellite alignment with the orientations of the central galaxies, searching for the so-called ``Holmberg effect''. We split our primary sample into several sub-samples, including blue/red, bright/faint, and early/late SED types. The blue and red and early and late sub-samples have roughly similar g-band luminosities. For early type and red primaries, we find some evidence for alignment between satellite positions and the major axes of the primary galaxies. We also study the dependence of the amplitude of the clustering signal on the primary properties. We find that early-type primaries have a stronger clustering signal with their satellite populations, a larger population per central galaxy and possibly a more extended radial distribution of satellites than the late-type primaries on average. This may indicate differences in the properties or in the baryonic evolution of the host halos of the two types of primaries.