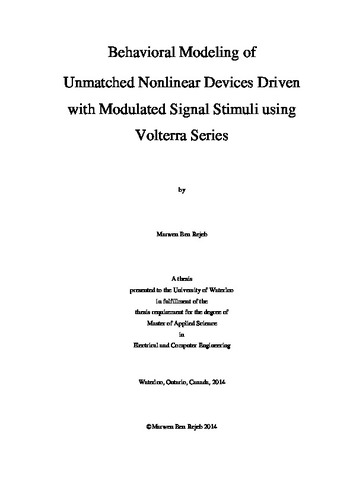 The accurate simulation of nonlinear radio frequency (RF) circuits under unmatched impedance conditions depends heavily on the device model used. Recently, measurement-based models under unmatched conditions were proposed in the literature, such as X-parameters and the Cardiff model, with acceptable device modeling accuracy under continuous-wave (CW) and multitone excitations. However, these schemes drop in accuracy when driven with wideband modulated signals since the pseudo-static property of the CW stimulus fails to capture the nonlinear device dynamics. Being a general framework to model nonlinear dynamic systems with fading memory, the Volterra series was successfully applied to model nonlinear RF devices under matched conditions. However, the few reported attempts to generalize the Volterra series to unmatched device scenarios oversimplify the formulation due to the underlying complexity burden. This thesis presents a novel low-complexity envelope domain multivariate model (i.e., dual-input dual-output or DIDO Volterra model), tailored to unmatched devices. The proposed model offers a theoretical framework to model the nonlinear device’s behaviour in any two-port network around the fundamental frequency. As the proposed methodology does not include any assumptions about the device under test (DUT), the resulting model can be applied to either RF transistors or power amplifiers (PAs). The detailed derivation steps, as well as the resulting mathematical formulations, are presented and discussed. For a fair assessment of the model’s performance, a simulation procedure was developed where a PA under varying load impedances was modeled. Any modeling exercise is tightly coupled to both the device characterization and measurement procedures. Indeed, the successful application of a behavioral model is contingent on a precise extraction of the nonlinear measurements. In the case of the DIDO Volterra model, the use of modulated signals as stimulus further complicates the measurement procedure and a more careful extraction procedure should be implemented. The platform should be able to correctly measure the travelling waves’ envelopes at the device ports while controlling the source/load impedances. Hence, the second part of this thesis outlines progress towards the realization of such a platform and focuses on explaining the associated challenges. A thorough discussion of the platform architecture and the underlying building blocks is presented and the related choices justified. Furthermore, additional calibration routines under wideband signals are described.