Kinetic Investigation and Modelling of Multi-Component Polymer Systems with Depropagation 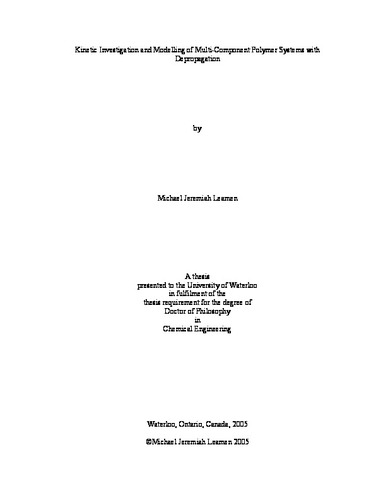 The phenomenon of depropagation or reverse polymerization for multicomponent polymerizations has been studied in detail. The monomer Alpha-Methyl Styrene (AMS) has been copolymerized with Methyl Methacrylate (MMA) and Butyl Acrylate (BA) at temperatures ranging from 60oC to 140oC and the kinetics have been studied in the form of propagation/cross propagation and depropagation parameters. There have been multiple attempts with varying amounts of success in the past to determine the kinetic parameters for depropagating systems including work by Lowry and Wittmer as well as other modelling methodologies that are not as mechanistic. The most recent development of the mechanistic terminal model is that of the Kruger model. The model is robust and can take into account all special cases as well as all reactions being reversible. The kinetic parameters have been estimated for each of the three binary systems using the Kruger model (MMA/AMS, MMA/BA, BA/AMS). The Alfrey-Goldfinger model is inadequate to describe depropagating terpolymer systems and in order to study them, a new model was developed based upon the binary Kruger model. This new model takes into account a fully depropagating terpolymer system leading to a total of 15 parameters to be estimated. These 15 parameters have the same definitions as those estimated from the binary Kruger model, thus making accurate analysis of the binary systems crucial since these will be used as first estimates for the terpolymer system. Extensive experimental data (composition, conversion and molecular weights) was collected and analysed for the MMA/AMS and BA/AMS systems. For the BA/AMS system both the bulk and solution copolymerizations were studied in detail with the results from the Kruger model not showing a significant difference in the reactivity ratios between the two types of polymerization. For the MMA/AMS system, a bulk study only was done which revealed an interesting phenomenon that points toward a break down of the long chain approximations used for all of the models being studied. For both of these systems, extensive <sup>1</sup>H NMR analysis was done to determine the copolymer composition. Data collected in previous research for the MMA/BA system was reanalysed using the Kruger model and it was found that the parameter estimates did not differ significantly from the published values. Extensive benchmarking was done with the newly developed terpolymer model on non-depropagating systems using data from the literature to ensure it worked for the simplest cases. It was found that the model matched the parameter estimates from the literature and in some cases improving upon them to fit the data better. Along with the benchmarking a sensitivity analysis was done which revealed some interesting information. For the MMA/BA/AMS terpolymer system a set of experiments (based upon practical considerations) were performed and the composition of the polymer was determined using <sup>13</sup>C NMR instead of the usual <sup>1</sup>H NMR due to the difficulty of peak separation for the complex terpolymer. Using the depropagating terpolymer composition data in conjunction with the parameter estimates from the three binary systems allowed for estimation of the 15 kinetic parameters, which showed only minor variation from the binary estimates.