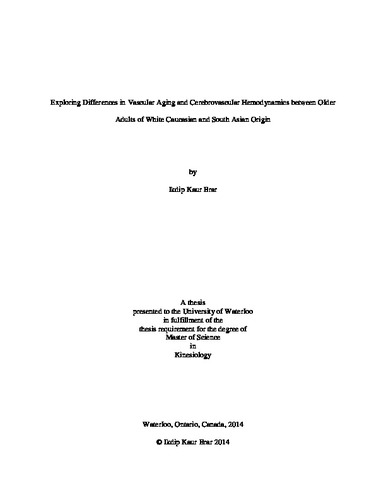 In Canada, the number of older adults has been on the rise over the past several decades. As the aging population continues to rise, the prevalence of chronic illnesses is projected to correspondingly increase at an unprecedented rate. Another factor contributing to the rise of chronic diseases is the significant disparities in disease burden that exist among certain ethnic minority groups in Canada’s multicultural society. South Asians (SA) constitute the largest minority group in Canada and suffer from a disproportionately high burden of heart disease and stroke compared to the rest of the population. Arterial stiffness is a hallmark characteristic of vascular aging and a recognized process that is linked to the development of cardio- and cerebrovascular diseases. A recent study conducted in our laboratory on healthy Caucasian (CA) older adults has found that elevated arterial stiffness is associated with increased cerebrovascular resistance, and this is in turn associated with reduction in brain blood flow (aCBF). This finding presents the possibility that SAs, who are reported to have elevated levels of arterial stiffness compared to their CA counterparts, may exhibit greater cerebrovascular resistance and greater reduction in aCBF, and as a consequence they may be more prone to cerebral hypoperfusion and subsequent ischemia. The primary purpose of this thesis was to examine differences in central arterial structure and function and cerebrovascular hemodynamic properties in CA and SA older adults matched for age and gender, and to explore ethnic differences in the relationship between arterial stiffness and aCBF. The secondary objective was to compare physical activity as well as cognitive performance between CAs and SAs and explore their relationship with characteristics of central arterial and cerebrovascular health. This study found that older adults of SA origin have greater arterial stiffness compared to older adults of CA origin, and that this was associated with greater cerebrovascular resistance and correspondingly greater reduction in aCBF in SAs. In addition, arterial wall thickness, IMT, appeared to be less pronounced in SAs compared to CAs, yet IMT was associated with greater resistance and pulsatility of blood flow in the cerebral vessels in SAs compared to CAs. SA older adults in this study lived a relatively sedentary lifestyle compared to CA older adults; nonetheless, physical activity of daily living among SA older adults was associated with lower glycemic levels and lower abdominal obesity (approximated by waist circumference and waist-to-hip ratio). With regards to cognitive performance, SAs performed slower on reaction time tasks compared to CAs. No significant relationships between cognitive performance and central arterial and cerebrovascular health were observed. Taken together, the findings from this study suggest ethnic disparities between CAs and SAs in vascular aging properties that may contribute to more pronounced alterations in cerebral hemodynamics in SAs.