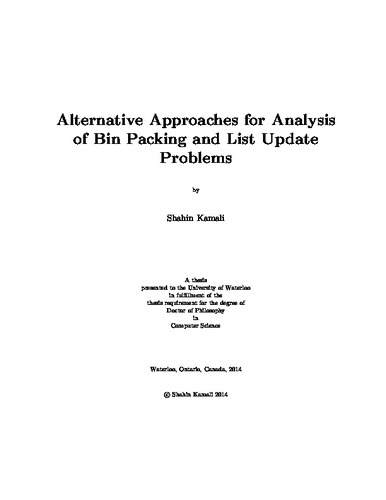 In this thesis we introduce and evaluate new algorithms and models for the analysis of online bin packing and list update problems. These are two classic online problems which are extensively studied in the literature and have many applications in the real world. Similar to other online problems, the framework of competitive analysis is often used to study the list update and bin packing algorithms. Under this framework, the behavior of online algorithms is compared to an optimal offline algorithm on the worst possible input. This is aligned with the traditional algorithm theory built around the concept of worst-case analysis. However, the pessimistic nature of the competitive analysis along with unrealistic assumptions behind the proposed models for the problems often result in situations where the existing theory is not quite useful in practice. The main goal of this thesis is to develop new approaches for studying online problems, and in particular bin packing and list update, to guide development of practical algorithms performing quite well on real-world inputs. In doing so, we introduce new algorithms with good performance (not only under the competitive analysis) as well as new models which are more realistic for certain applications of the studied problems. For many online problems, competitive analysis fails to provide a theoretical justification for observations made in practice. This is partially because, as a worst-case analysis method, competitive analysis does not necessarily reflect the typical behavior of algorithms. In the case of bin packing problem, the Best Fit and First Fit algorithms are widely used in practice. There are, however, other algorithms with better competitive ratios which are rarely used in practice since they perform poorly on average. We show that it is possible to optimize for both cases. In doing so, we introduce online bin packing algorithms which outperform Best Fit and First Fit in terms of competitive ratio while maintaining their good average-case performance. An alternative for analysis of online problems is the advice model which has received significant attention in the past few years. Under the advice model, an online algorithm receives a number of bits of advice about the unrevealed parts of the sequence. Generally, there is a trade-off between the size of the advice and the performance of online algorithms. The advice model generalizes the existing frameworks in which an online algorithm has partial knowledge about the input sequence, e.g., the access graph model for the paging problem. We study list update and bin packing problems under the advice model and answer several relevant questions about the advice complexity of these problems. Online problems are usually studied under specific settings which are not necessarily valid for all applications of the problem. As an example, online bin packing algorithms are widely used for server consolidation to minimize the number of active servers in a data center. In some applications, e.g., tenant placement in the Cloud, often a `fault-tolerant' solution for server consolidation is required. In this setting, the problem becomes different and the classic algorithms can no longer be used. We study a fault-tolerant model for the bin packing problem and analyze algorithms which fit this particular application of the problem. Similarly, the list update problem was initially proposed for maintaining self-adjusting linked lists. However, presently, the main application of the problem is in the data compression realm. We show that the standard cost model is not suitable for compression purposes and study a compression cost model for the list update problem. Our analysis justifies the advantage of the compression schemes which are based on Move-To-Front algorithm and might lead to improved compression algorithms.