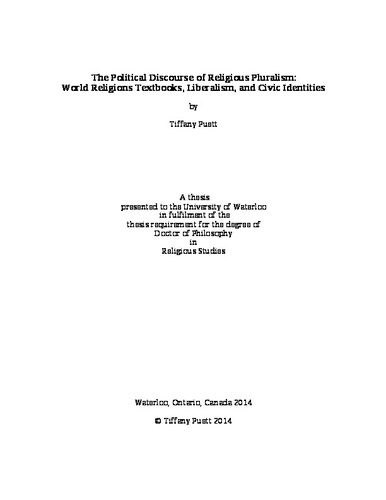 Religious pluralism is a meaningful framework for many scholars and students of religion as well as citizens working to make sense of a religiously and culturally diverse society. It purports noble aims: bringing people together across differences and facilitating the inclusion of more people at the proverbial table of democracy. Pluralism has become an essential element in the management of religious diversity in the American public sphere. While presenting itself as politically neutral, the discourse of pluralism is, in fact, embedded with veiled politics. While it embraces a democratizing agenda, it simultaneously engages in regulatory activities that impose limitations and exclusions on people’s beliefs and behaviors. My work investigates this tension. I use Norman Fairclough’s theory of critical discourse analysis to analyze world religions textbooks as discursive sites for the production of the discourse of religious pluralism. I contend that pluralism is a formally non-political discourse that reproduces and legitimates liberal norms and ideology. It functions as a practice of liberal governance—a mode of governmentality. Its discursive practices serve as tools for orchestrating social cohesion and regulating religion within a liberal social framework. By framing this analysis through the concept of governmentality, I aim to explore the enduring salience of liberalism in American society and the multiple discourses that support liberalism’s totalizing tendencies. I investigate the ways in which the rhetoric of liberalism touts individual freedoms as a foundational value, while it simultaneously works in other ways to implicitly manage, regulate, and limit many of those freedoms. As I look at how these world religions textbooks help to mediate and transmit the liberal public sphere, I also consider how these discursive practices reveal the ambivalence and complexity involved in religious diversity in the U.S.