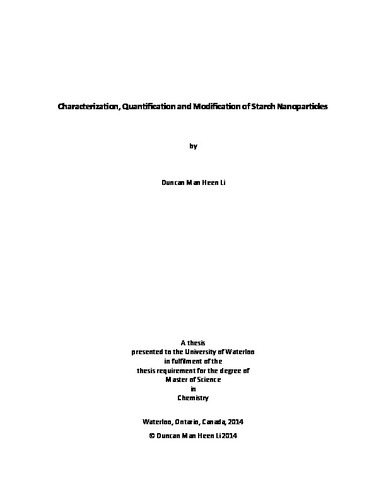 Natural polymers, such as polysaccharides, have the potential to replace petroleum-based polymers in certain industrial applications. Ecosphere® starch nanoparticles (ENPs), produced by EcoSynthetix Inc., are starch-based and considered as a natural polymer. ENPs are produced by reactive extrusion of a thermoplastic melt of starch and glycerol in the presence of glyoxal which acts as a crosslinker. Aqueous dispersions of the ENPs, called Biolatex®, are used as a replacement for petroleum-based styrene-butadiene and styrene-acrylate copolymer latex emulsions in paper making. The objectives of this research were two-fold. The first objective was to explore the nature of the glyoxal crosslink in the ENPs. The second objective was to modify the ENPs with cationic groups and characterize the modified starches using nuclear magnetic resonance (NMR). Multidimensional NMR techniques, such as heteronuclear multiple-quantum correlation spectroscopy (HMQC) and heteronuclear multiple-bond correlation spectroscopy (HMBC) were the primary techniques used to learn more about the presence of a crosslink, the stability of the crosslink and the location of the crosslink in water, DMSO, and DMSO/water mixtures. Cationic modifications were accomplished by reacting the ENPs with reagents such as 2,3-epoxypropylalkylammonium chloride or 3-chloro-2-hydroxypropyltrialkylammonium chloride, which are used extensively in the cationic modification of starch and other polysaccharides. Reactions conditions such as the temperature, solvent, reagent and substrate concentrations were varied to control the degree of substitution. These modified ENPs were characterized by NMR to determine their degrees of substitution.