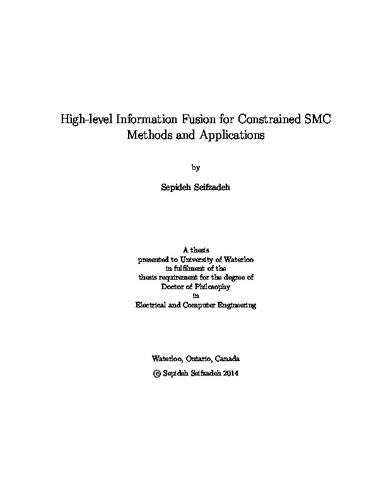 Information Fusion is a field that studies processes utilizing data from various input sources, and techniques exploiting this data to produce estimates and knowledge about objects and situations. On the other hand, human computation is a new and evolving research area that uses human intelligence to solve computational problems that are beyond the scope of existing artificial intelligence algorithms. In previous systems, humans' role was mostly restricted for analysing a finished fusion product; however, in the current systems the role of humans is an integral element in a distributed framework, where many tasks can be accomplished by either humans or machines. Moreover, some information can be provided only by humans not machines, because the observational capabilities and opportunities for traditional electronic (hard) sensors are limited. A source-reliability-adaptive distributed non-linear estimation method applicable to a number of distributed state estimation problems is proposed. The proposed method requires only local data exchange among neighbouring sensor nodes. It therefore provides enhanced reliability, scalability, and ease of deployment. In particular, by taking into account the estimation reliability of each sensor node at any point in time, it yields a more robust distributed estimation. To perform the Multi-Model Particle Filtering (MMPF) in an adaptive distributed manner, a Gaussian approximation of the particle cloud obtained at each sensor node, along with a weighted Consensus Propagation (CP)-based distributed data aggregation scheme, are deployed to dynamically re-weight the particle clouds. The filtering is a soft-data-constrained variant of multi-model particle filter, and is capable of processing both soft human-generated data and conventional hard sensory data. If permanent noise occurs in the estimation provided by a sensor node, due to either a faulty sensing device or misleading soft data, the contribution of that node in the weighted consensus process is immediately reduced in order to alleviate its effect on the estimation provided by the neighbouring nodes and the entire network. The robustness of the proposed source-reliability-adaptive distributed estimation method is demonstrated through simulation results for agile target tracking scenarios. Agility here refers to cases in which the observed dynamics of targets deviate from the given probabilistic characterization. Furthermore, the same concept is applied to model soft data constrained multiple-model Probability Hypothesis Density (PHD) filter that can track agile multiple targets with non-linear dynamics, which is a challenging problem. In this case, a Sequential Monte Carlo-Probability Hypothesis Density (SMC-PHD) filter deploys a Random Set (RS) theoretic formulation, along with Sequential Monte Carlo approximation, a variant of Bayes filtering. In general, the performance of Bayesian filtering-based methods can be enhanced by using extra information incorporated as specific constraints into the filtering process. Following the same principle, the new approach uses a constrained variant of the SMC-PHD filter, in which a fuzzy logic approach is used to transform the inherently vague human-generated data into a set of constraints. These constraints are then enforced on the filtering process by applying them as coefficients to the particles' weights. Because the human generated Soft Data (SD), reports on target-agility level, the proposed constrained-filtering approach is capable of dealing with multiple agile target tracking scenarios.