Analysis of the Asymptotic Performance of Turbo Codes 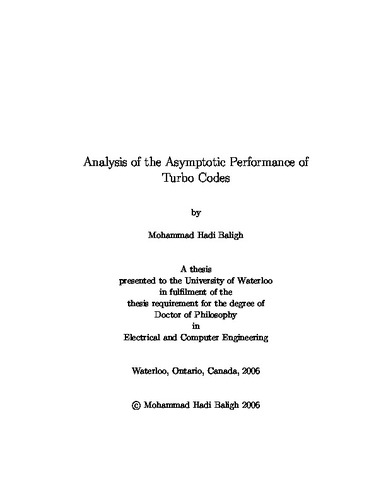 Battail [1989] shows that an appropriate criterion for the design of long block codes is the closeness of the normalized weight distribution to a Gaussian distribution. A subsequent work shows that iterated product of single parity check codes satisfy this criterion [1994]. Motivated by these earlier works, in this thesis, we study the effect of the interleaver on the performance of turbo codes for large block lengths, $N\rightarrow\infty$. A parallel concatenated turbo code that consists of two or more component codes is considered. We demonstrate that for $N\rightarrow\infty$, the normalized weight of the systematic $\widehat{w_1}=\displaystyle\frac{w_1}{\sqrt{N}}$, and the parity check sequences $\widehat{w_2}=\displaystyle\frac{w_2}{\sqrt{N}}$ and $\widehat{w_3}=\displaystyle\frac{w_3}{\sqrt{N}}$ become a set of jointly Gaussian distributions for the typical values of $\widehat{w_i},i=1,2,3$, where the typical values of $\widehat{w_i}$ are defined as $\displaystyle\lim_{N\rightarrow\infty}\frac{\widehat{w_i}}{\sqrt{N}}\neq 0,1$ for $i=1,2,3$. To optimize the turbo code performance in the waterfall region which is dominated by high-weight codewords, it is desirable to reduce $\rho_{ij}$, $i,j=1,2,3$ as much as possible, where $\rho_{ij}$ is the correlation coefficient between $\widehat{w_i}$ and $\widehat{w_j}$. It is shown that: (i)~$\rho_{ij}>0$, $i,j=1,2,3$, (ii)~$\rho_{12},\rho_{13}\rightarrow 0$ as $N\rightarrow\infty$, and (iii)~$\rho_{23}\rightarrow 0$ as $N\rightarrow\infty$ for "almost" any random interleaver. This indicates that for $N\rightarrow\infty$, the optimization of the interleaver has a diminishing effect on the distribution of high-weight error events, and consequently, on the error performance in the waterfall region. We show that for the typical weights, this weight distribution approaches the average spectrum defined by Poltyrev [1994]. We also apply the tangential sphere bound (TSB) on the Gaussian distribution in AWGN channel with BPSK signalling and show that it performs very close to the capacity for code rates of interest. We also study the statistical properties of the low-weight codeword structures. We prove that for large block lengths, the number of low-weight codewords of these structures are some Poisson random variables. These random variables can be used to evaluate the asymptotic probability mass function of the minimum distance of the turbo code among all the possible interleavers. We show that the number of indecomposable low-weight codewords of different types tend to a set of independent Poisson random variables. We find the mean and the variance of the union bound in the error floor region and study the effect of expurgating low-weight codewords on the performance. We show that the weight distribution in the transition region between Poisson and Gaussian follows a negative binomial distribution. We also calculate the interleaver gain for multi-component turbo codes based on these Poisson random variables. We show that the asymptotic error performance for multi-component codes in different weight regions converges to zero either exponentially (in the Gaussian region) or polynomially (in the Poisson and negative binomial regions) with respect to the block length, with the code-rate and energy values close to the channel capacity.