The Creek That is Not: A Composite Park-way at the Garrison Creek 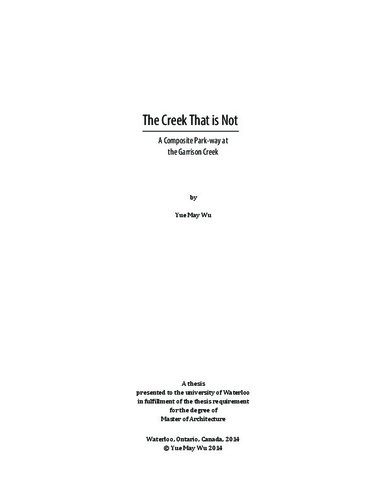 A century after the burial of Garrison Creek, Toronto continues to experience urban floods and unpleasant sewer problems as a result of the unsettling creek. And as gentrification spreads westwards in the city, the neighborhoods where the former creek flowed through, are subject to commercial development dissecting the Victorian neighborhoods into fragments of polarized places resulting in the lack of continued public spaces for play. This thesis is conceived based on Michael Hough’s theory of holistic design and draws design inspirations from landscape architects such as Kongjian Yu and Michel Desvigne to mediate the tension between city and nature by using localized strategies. Additionally, the writings of Aldo van Eyck and Jane Jacobs further anchor the thesis’s strong belief in the intimate relationship between public life, ecology and the urban environment. Combining the concerns of ecology, stromwater infrastructure and urban public space, this thesis proposes a series of design interventions centering on the Fred Hamilton Park at the College and Shaw neighborhood. The proposal is aimed at converting the area’s current open spaces including parks, street corners and school yards into multi-functional public spaces that bear both environmental and social responsibilities. A water playground, programmed earth terraces, and stromwater retention basins form the central hub of the neighborhood—while a school wetland garden, a street corner square and an all-can-accessible park extend opportunities for play and environmental education into all corners of the neighborhood. Three scales of exploration—entire watershed, local neighborhood and detailed construction assembly—are executed in the design to create a composite network of public spaces that re-establishes the function and life of the former creek.