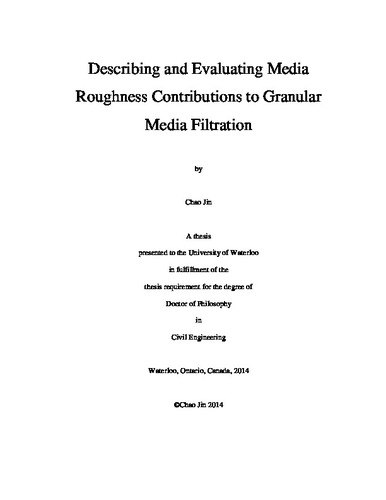 The transport and fate of particles including microorganisms during physico-chemical filtration in natural and engineered aquatic environments remains essential for effective and sustainable drinking water treatment and wastewater reclamation, as well as understanding and assessing the risk of environmental contamination of water supplies. The development of models to predict particle deposition by physico-chemical filtration has been ongoing since the 1960’s. What is now considered classical colloid filtration theory (CFT) was developed in the 1970’s to predict particle removal during granular media filtration used for drinking water treatment. More recently, CFT has been applied to various applications related to subsurface particle and microbial transport and fate, including riverbank filtration, aquifer storage and recovery, bioremediation, and assessment of contaminant transport and fate. Significant discrepancies between predictions of particle deposition from current CFT models and experimental observations have been reported. While several model variations of CFT have been reported, models focusing on integration of impacts of collector surface geometry and physically-based mechanisms such as hydrodynamics have been rarely reported. The overall goal of this work was to describe and evaluate the contribution of media grain (collector) surface roughness on particle removal by physico-chemical filtration. Four phases of experiments were conducted to investigate the impacts of surface roughness on particle deposition in porous media and parallel plate systems. Bench scale “proof of concept” experiments (Phase I) were conducted using small filtration columns, two sizes of colloidal particles (1.0 and 4.5 μm diameter polystyrene microspheres), two sizes of glass beads (0.71 to 0.85 mm and 0.5 to 0.595 mm), and three different levels of surface roughness. The experiments demonstrated that surface roughness not only enhanced particle deposition, but also decreased it. Classic colloid filtration theory, chemical heterogeneity, and hydrophobicity fail to explain this non-linear, non-monotonic impact of surface roughness on particle deposition; particularly decreased deposition resulting from increased surface roughness. The results indicated the existence of a minimum particle deposition efficiency that is unique to each combination of sizes of colloidal particle, collector, and collector roughness. To verify this research finding, particle deposition experiments were conducted using a parallel plate chamber (Phase II) to further confirm and characterize the contribution of surface roughness to particle deposition. The impacts of different nano-scale quartz surface roughness sizes (10, 20, 50, 200 and 400 nm) on deposition kinetics of three sizes (0.55, 0.985 and 1.765 μm) of polystyrene microspheres suspended in 100 mM KCl were examined. A non-linear, non-monotonic relationship between surface roughness and particle deposition flux was again observed. A critical roughness size associated with a minimum deposition flux was identified for the experimental conditions investigated. A numerical model approach incorporating the effect of surface roughness on flow field profile, hydrodynamic retardation functions, and DLVO interaction energy was developed for a parallel plate chamber system (Phase III). Key physical and chemical properties of the flow field, colloids and the modified rough surface were precisely measured and utilized in the simulation. Changes to the flow field, the hydrodynamic retardation functions, and the DLVO interaction energy due to the presence of nano-scale collector surface roughness were implemented in the developed model. The numerical solutions obtained using the developed model had excellent agreement with the experimental results obtained in research Phase II. This work provided a mathematical framework that was more applicable to real practice by including the effect of the collector surface roughness on particle deposition. The importance of the gravity effect was identified, underscoring the importance of precise measurements of particle size and density for model development. The verified model framework developed for a parallel plat chamber in Phase III was extended to spherical geometry and utilized to simulate particle deposition behavior in porous media in Phase IV. Functions that were validated in Phase III for the flow field profile, the hydrodynamic retardation functions, and the DLVO interaction energy were utilized. Various operational scenarios including particle size, loading rate and ionic strength were investigated. The Phase IV results could also be used to explain experimental results observed in the porous media experiments (Phase I). It was found that the presence of nano-scale surface roughness was able to improve the particle deposition on spherical collectors; the enhancement became more significant when roughness element height increased. Overall, this work demonstrated that nano-scale surface roughness and associated hydrodynamics can impact on particle deposition. These impacts can and should be incorporated into predictive mathematical models of clean bed colloidal particle deposition.