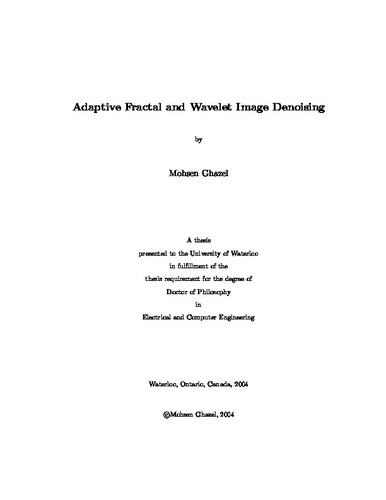 The need for image enhancement and restoration is encountered in many practical applications. For instance, distortion due to additive white Gaussian noise (AWGN) can be caused by poor quality image acquisition, images observed in a noisy environment or noise inherent in communication channels. In this thesis, image denoising is investigated. After reviewing standard image denoising methods as applied in the spatial, frequency and wavelet domains of the noisy image, the thesis embarks on the endeavor of developing and experimenting with new image denoising methods based on fractal and wavelet transforms. In particular, three new image denoising methods are proposed: context-based wavelet thresholding, predictive fractal image denoising and fractal-wavelet image denoising. The proposed context-based thresholding strategy adopts localized hard and soft thresholding operators which take in consideration the content of an immediate neighborhood of a wavelet coefficient before thresholding it. The two fractal-based predictive schemes are based on a simple yet effective algorithm for estimating the fractal code of the original noise-free image from the noisy one. From this predicted code, one can then reconstruct a fractally denoised estimate of the original image. This fractal-based denoising algorithm can be applied in the pixel and the wavelet domains of the noisy image using standard fractal and fractal-wavelet schemes, respectively. Furthermore, the cycle spinning idea was implemented in order to enhance the quality of the fractally denoised estimates. Experimental results show that the proposed image denoising methods are competitive, or sometimes even compare favorably with the existing image denoising techniques reviewed in the thesis. This work broadens the application scope of fractal transforms, which have been used mainly for image coding and compression purposes.