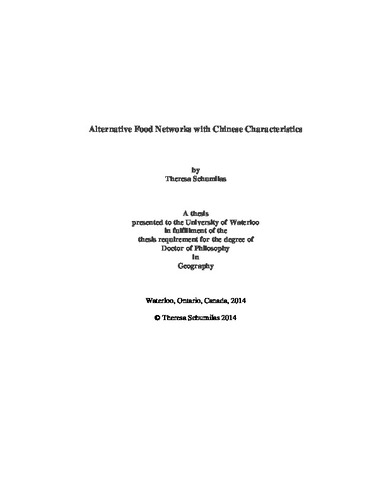 Scholars studying Alternative Food Networks (AFNs) have struggled with the question of whether these initiatives are a type of entertainment for a few middle class consumers, or the part of a political struggle to configure new food system relations. My response is that in China, AFNs are both. This research provides an empirically grounded theoretical analysis of AFNs, or assemblages of Community Supported Agriculture (CSA) farms, buying clubs and ecological farmers’ markets, forming in China’s industrialized regions. AFNs in the global north have emerged in liberal capitalist democracies with industrialized food systems characterized by private land ownership, declining small farm sectors, consolidated farm to retail chains, predominance of supermarket retail, standards and laws to safeguard food safety and an active civil society sector. The Chinese context sits in contrast with its unique version of ‘capitalism with social characteristics’, a commons approach to land ownership, predominance of smallholder agriculture and traditional marketing chains, a commitment to domestic food security, nascent food safety legislation and a civil society with limited autonomy from an authoritarian state that keeps shifting the terrain of what is permitted. In this landscape, new food procurement relations that I consider AFNs, have emerged in response to the loss of the peasantry and its traditions, environmental crises perpetuated by productivist agriculture policies, and a persistent ‘food safety crisis’. These nascent food networks manifest contradictory characteristics. I argue that instead of fitting into the ‘either or’ categories of conventional and alternative food systems, China’s AFNs need be seen as hybrid systems. This research explores 19 AFN cases (CSA farms, farmers’ markets and buying clubs) using interviews, site visits, surveys and blog monitoring. It explores these networks using four ‘lenses’. First, I examine the capitalist and other-than-capitalist relations in these AFN using a post-capitalist diverse economies framework. I reveal diverse economic relations in China’s AFNs where capitalist and non-capitalist relations co-exist and where the persistence of the peasantry, de-peasantization and re-peasantization processes all occur simultaneously. Second, I examine the ecological relations in these networks. I argue that in the context of productivism associated with strong domestic food security policies, these AFNs demonstrate a mixture of traditional and modern production methods. Further, reacting to a widespread distrust of state-led organic and ecological agriculture institutions, producers and consumers in these networks are forging bottom-up alternatives and constructing their own meaning of ecological and organic through reflexive civic process. Third, I look at the interpersonal relations in these networks and the degree to which they are relations characterized by trust and reconnections between producers and consumers. I examine how re-building trust in the context of China’s ‘food safety crisis’ proves difficult in these AFNs. Using care ethics theory, I reveal how these AFNs can be seen as ‘windows’ through which people can glimpse different kinds of reconnections and care ethics, that for many result in hybrid producer-consumer identities that complicate market based notions of people who buy and people who supply food. Finally, I look at the political relations in these networks and consider they degree to which they can be understood as transformative. I argue that these AFNs are beginning to create a space ‘beyond the market’ to fill a civil society void and influence broader food system issues and policies. In the context of the pervasive uncertainty of an authoritarian state, China’s AFNs are developing a repertoire of subtle and often covert ‘everyday resistance’ strategies to challenge hegemony. Beyond being ‘simply’ sites of material transactions, these AFNs can be seen as ‘portals’ through which people can connect to trans-global food justice movements that have no official presence in China. Individualist responses of consumption and collective responses of citizens are being transgressed and we can understand AFNs as hybrids of market based initiatives and civil society movements.