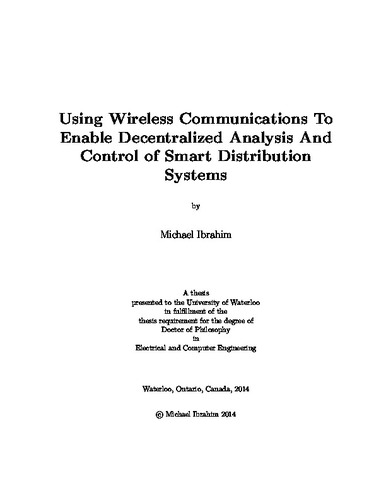 The smart grid is a multidisciplinary approach that aims to revolutionize the whole electricity supply chain including generation, transmission and distribution systems in order to overcome the multiple challenges currently facing the electric power grid. The smart grid could be seen as a modern electrical power grid in which information as well as electricity flows among all nodes in the system, information is continuously collected, processed and hence used to control and coordinate the different system components such as distributed generation (DG) units, capacitor banks, voltage regulating transformers, etc. Therefore distributed intelligence and two-way data communication links are essential components in implementing the smart grid vision. There are numerous research efforts that focus on implementing the smart grid vision in electrical power distribution systems, most of which only target one aspect of the distribution system control and operation, e.g. a control system for voltage control, another one for DG control, a third one for protection, etc. The coexistence of such control strategies in a distribution system raises some concerns about their overall performance, their interactions with the other control strategies, and whether these control systems can adapt to changes in distribution system connectivity. In this PhD thesis we try to address these issues by proposing an implementation of the smart grid vision for distribution systems that provides an integrated design of power systems, communication systems and control strategies. A unified and flexible framework that incorporates all the different aspects of distribution system control and operation is proposed. Distributed processing units equipped with wireless communication capabilities are used to continuously process the local data along with the data received from other nodes and forward the results to neighboring nodes in the system, which in turn process the received data and share the results with their neighbors. Consequently, changes in any of the system components (load values, status of DG etc.) are taken into account in the calculations as soon as they occur, and the results are forwarded to relevant nodes in the systems. This way the information “propagates” throughout the system resulting in a seamless control and coordination among all the system components. Simulation of the electrical power distribution and the communication systems reveal the effectiveness of the proposed framework to control and coordinate multiple capacitor banks, DG units and voltage regulating transformers with changing load levels. It also reveals the potential of the proposed framework to operate in real-time by combining the real-time measured quantities with computer analysis in order to control the different system components within the time frame of normal non-emergency operating conditions. An experimental setup is built and used as a test bed for the proposed framework in order to assess the performance of the different ideas and techniques proposed in this thesis.