The role of hindsight in transcriptional regulation during Drosophila melanogaster development 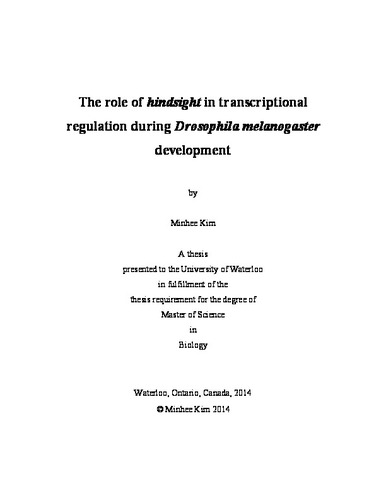 In Drosophila melanogaster, hindsight (hnt) encodes a putative Zinc-finger transcription factor that is expressed in a highly complex pattern during development. Despite an apparent wealth of information regarding the dynamic expression pattern of hnt, the cellular response and defined target genes of Hnt remain largely unknown. Hnt is important in various developmental processes, and recent work suggests that Hnt function is downstream of the Notch (N) signaling pathway. Interestingly, the mammalian homolog of hnt is RAS-Responsive Element Binding Protein 1 (RREB1), which functions by binding to the RAS-responsive elements of the target gene promoters. Ras is a key downstream effector of the highly conserved Epidermal Growth Factor Receptor (EGFR) signaling pathway, yet the relationship between Hnt and EGFR signaling has not been extensively studied using the powerful approach of Drosophila genetics. This study involved a detailed examination of hnt mutant phenotypes and phenotypes associated with Hnt overexpression. Overall, this work revealed striking similarities between egfr and hnt mutant embryos. In particular, hnt mutant embryos were found to resemble egfr mutant embryos in their failure to properly develop peripheral nervous system (PNS) structures known as chordotonal organs and in their inability to recruit neighbouring secretory oenocytes. In addition, Hnt overexpression was found to induce ectopic DPax2 expression in an EGFR-dependent manner within the embryo. This relationship was also examined in a second developmental context, the pupal retinal neuroepithelium. Overall, the data presented suggests that Hnt’s primary function in the development of the PNS is associated with potentiating EGFR signaling.