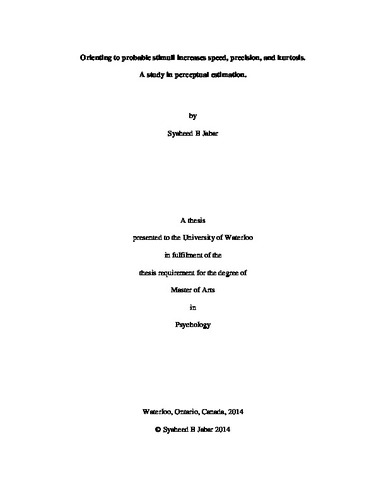 Stimulus probabilities affect detection performance. Rare targets, even in security or medical screenings, are missed more often than frequent ones. To minimize such probability-related costs, there is a need to understand how probability effects develop and how they might interact with perceptual processes. A previous experiment demonstrated that estimates of Gabor orientations were more precise on trials where the Gabor location was exogenously cued. Exogenous cues might be biasing perceptual processing towards the features in the cued location, and enhancing the perceptual representations of the target. Here, the same “attentional” effects were replicated without the use of explicit cues. Instead, different location-orientation conjunctions occurred with different probabilities. Across different probability distributions, it was consistently observed that participants rapidly developed faster and more precise estimations for higher-probability tilts. This occurred despite participants not being instructed on the underlying probability distributions, despite participants not being able to indicate confidence differences (Experiment 1b), despite the probability distribution being complex (Experiment 2), and despite probability differences being fine-grained (Experiment 3). High-probability tilts were also consistently associated with a distribution of angular errors that were more kurtotic than for low-probability tilts. Mixture model analyses suggested that these kurtosis differences reflect a mix of ‘precise’ and ‘coarse’ estimations, with high-probability tilts being associated with more of the former. Additionally, near-vertical orientations were associated with an increased kurtosis, particularly when vertical tilts were probable. Similar to mechanisms underlying perceptual biases, these findings suggest that acquired information might be affecting neural sensitivity to result in better-encoded perceptual representations for high-probability tilts.