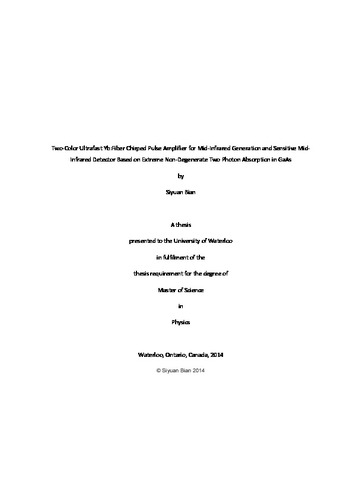 This thesis outlines the development and optimization of a two-color three-stage ultrafast Yb:fiber chirped pulse amplifier for the generation of mid-infrared (MIR) radiation and a novel sensitive mid-infrared detector by using extreme non-degenerate two photon absorption (END-TPA) technique in GaAs. The two amplified colors used to generate MIR by difference frequency generation are centered at 1038nm and 1103nm respectively. The two colors are generated by continuum generation in a photonic crystal fiber pumped by a mode-locked Yb:fiber laser. One of the main goals of this thesis is to improve the power of the two colors to improve the MIR generation efficiency, because the difference frequency nonlinear mixing is proportional to the product of the power of the input colors. Towards this goal, we developed a three-stage Yb:fiber chirped pulse amplifier system that can generate more powerful MIR radiation compared with our previous two-stage system. In this thesis, approximately 65nm of wavelength separation between the two colors centered at 1038nm and 1103nm is accomplished through our pre-amplifier and two main amplifiers. The maximum combined average power is 2.65W after the last amplifier. A three-grating compressor is then used to compress the two colors to around 600fs and 1ps pulse durations and the average power of two colors is reduced to 1.86W after the compressor. By applying difference frequency generation in a 1-mm-thick GaSe crystal, 1.7mW average power, short-pulse MIR radiation is achieved. In this research, another important goal is to develop a sensitive MIR radiation detector based on END-TPA. It is well known that when the total photon energies of two photons exceed the energy band-gap of a semiconductor, the two photons will be absorbed simultaneously. More recently, it has been shown that if there is an extremely large difference between the frequencies of the two incident photons there can be a large increase in the two-photon absorption coefficient. Our goal is to demonstrate END-TPA in GaAs with the generated 17.6µm MIR radiation pulses and 920nm pulses that are generated in the continuum produced in the photonic crystal fiber. The two pulses are temporally and spatially overlapped onto a GaAs detector. This END-TPA detector could then be used to measure the pulse duration of the ultra-short MIR pulse based by cross-correlation of the MIR and 920nm pulses.