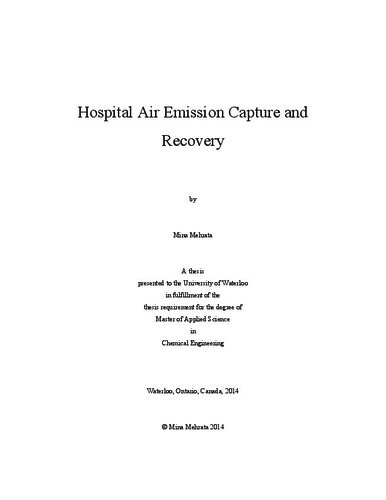 Inhaled anesthetics used in hospital surgeries are typically volatile halogenated hydrocarbons. Very few of them are absorbed or metabolized by the patient during use, and, therefore, most of the exhaled gases are collected in the exhaust system and emitted directly to the environment, where they contribute to global warming and stratospheric ozone depletion. This research focuses on a capture and treatment system for the common anesthetic gases (Isoflurane, Sevoflurane and Desflurane) which includes the capture of these compounds in addition to their recovery by regeneration in a form that can possibly be re-used in hospitals or manufacture. The first step in this research was the development of appropriate quantification methods using a gas chromatograph and an FTIR instrument for accurate measurement of the concentrations in batch and continuous flow systems, respectively. In developing a capture system, activated carbon, molecular sieves, and other adsorbents were tested in different batch experiments using several of the most common anesthetic compounds. The activated carbon Norit A48 (with 100% adsorption efficency) was 1.5 to 4 times more efficient at absorbing the halothane than either the polyethylene (25%), the molecular sieve 4A (38%), the industrial white adsorbent (57 %), and the silica gel (63 %) at room temperature. It was similar in adsorption capacity to the Activated Carbon RB 40M (99.8%), the Activated Carbon Vapure 410 (98.8%), the Molecular Sieve 13X (96 %), and the Sigma Activated Carbon (87 %). The GAC 48 (96.5 %) was 1.8 to 2 times more efficient at absorbing the Isoflurane than the industrial white adsorbent (41 %), and the silica gel (51 %) at room temperature. Isoflurane with intial volumes of 50, 100, 150 and 200 µl were adsorbed by GAC A48 with 98.8, 96.5, 74.5, and 64.1 % efficiency, respectively, after 120 minutes. In addition, sevoflurane with intial volumes of 50, 100, 150 and 200 µl were captured By GAC A48 with 99.0, 72.6, 65.3, and 50.4 % efficiency in the same time. Therefore, GAC A48 was selected as the best adsorbent for capturing both Isoflurane and Sevoflurane with the same adsorption rate at room temperature. Adsorption isotherms were measured for activated carbon and a selection of different anesthetics. In order to account for all the factors in the adsorption process at the hospital, the effects of other parameters such as temperature, gas mixing, initial concentration, and humidity were tested. TGA (thermal gravimetric analysis) was used to confirm that complete desorption was possible in the batch system. Before the industrial set up was tested, a flow through system with air as the carrier gas was designed in the laboratory to closely simulate the expected hospital emissions. Satisfactory results obtained in the laboratory were followed with the installation of a tank containing the best adsorbent connected to a hospital emission system. When the tank carbon bed reached its saturation point after three weeks, desorption proceeded in two steps: “depressurization” and “ heated desorption”. Desorbed amounts of anesthetic in the depressurization step were negligible in comparison with the amounts collected in the heated desorption step in which a tank of activated carbon was heated while air was passed through it. The condensation of desorbed anesthetics was successfully performed in two stages: the removal of water and the condensation of desorbed anesthetics in in a flask and a coil that were both immersed in dry ice. The temperature of the dry ice was at least -78 °C. Analysis of the condensate in the second stage confirmed the capture of relatively pure sevoflurane and desflurane. A white solid and a little oily liquid by-product were detected during the desorption process that could not be accurately identified by using available laboratory analytical methods. The anesthetic gas absorption results using a tank of activated carbon at the hospital illustrates that the optimal adsorbent could adsorb anesthetics at about 25 % of its initial weight, although some break-through happened before the saturation point was reached. The main recommendations arising from these experiments include: Installing an online tank heating system to enhance the desorption of the anaesthetic gas collection system; and designing a heat exchanger system for effective condensation of the anesthetic gases after the desorption process.