Exploring the impact of the pedestrian environment on public transportation: A case study of Waterloo Region 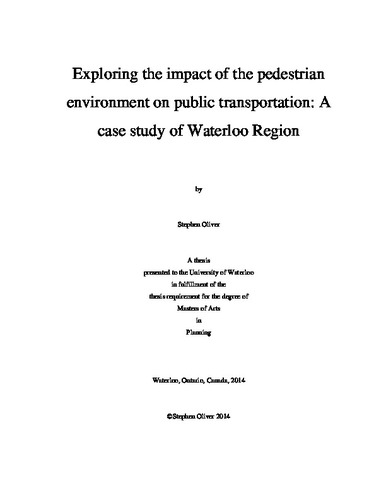 In planning communities with balanced transportation options that were once defined by the personal vehicle a comprehensive understanding multi-modal relationships in transportation is required. Public transportation provides a mechanism to move many people through the same space effectively increasing distance and access of a resident. The journey of a public transportation user begins the moment they leave the door on route to the transit stop and only concludes after they disembark the transit vehicle and traveled to their destination. Understanding the influence of the environment between that door and that stop is the objective of this research. This research is approached through quantitative analysis of the built environment and public transit ridership in the Region of Waterloo, Ontario, Canada. This is achieved through a bus stop level of analysis and linking the built environment within a standard 400 meter radius circular buffer to that stop. The response variable is provided in two forms, average boarding and alighting by stop through a one hour peak time or all day travel. A literature review informed the selection of intervening and predictor variables. Intervening variables were selected to inform characteristics known to influence public transit use. These variables were Population density, Employment density, Transit level of service and Transfer location. Predictor variables were selected to measure different characteristics of the pedestrian environment. These variables included: Land use Entropy, Sidewalk length, Intersection density, Traffic speed, Traffic signal density and a Ratio of sidewalk length to road length. Linear regression was used initially to correlate the relationship between public transit ridership and these variables. It was found that several of these variables showed no, or little statistical significance or impact. The best model was the variable combination Population density, Employment density, Transit level of service, Transfer location, Entropy and Ratio; with the response variable measuring All day average boarding and alighting correlated to an adjusted R² of 0.436. It is found that the predictor variables have little impact on the adjusted R²; however, they are statistically significant in their relationship to ridership. Spatial regression is then used to further examine this relationship. This is conducted using the built environment variables identified as most influential using linear regression. Here it is found that the intervening variables correlate higher with ridership when a spatial lag model is used. The predictor variables however fail to achieve significance. It is concluded that the pedestrian environment has a low impact on overall public transportation ridership patterns. The pedestrian environment is however significant in informing analysis of the built environment around public transit stops. This research informs academics quantifying the built environment for both public transit and pedestrian use. The conclusions suggest that sparse pedestrian infrastructure will not define ridership but an increase in the pedestrian environment supports a public transit system. Several variables examined here can inform planners and academics in their methods for conducting similar research supporting multi-modal travel.

Stephen Oliver (2014). Exploring the impact of the pedestrian environment on public transportation: A case study of Waterloo Region. UWSpace. http://hdl.handle.net/10012/8786