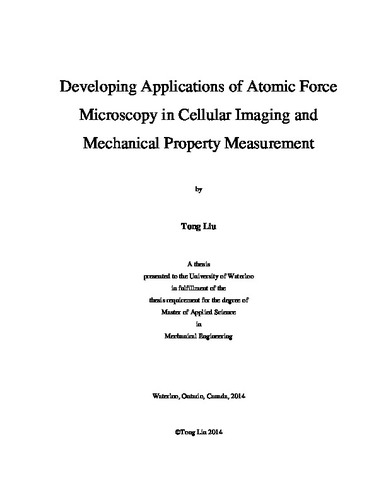 Health of human body is strongly associated with the mechanical properties of living cells. Here, atomic force microscope (AFM) was applied to obtain surface microscopy of individual and non-individual biological cells, which is essential to determining the cell migration behavior for studying the pathogenesis. In order to track a single cell and measure its deformation, digital image correlation (DIC) technique was performed on AFM images. Unlike ordinary optical images, AFM images are composed of massive spatial information. Thus, image reconstruction and specific two-dimension DIC codes were developed and optimized by using MATLAB, and then applied to images of cells. The results of this study showed the capability of DIC as a cell migration tracker and suggested the potential as a deformation sensor, or even a diagnosing tool for the onset and progression of disease. Mechanical properties (elastic modulus) of live and dead human corneal epithelial cells (HCECs) were also presented in this thesis. All of the modulus measurements were achieved by using AFM nano-indentation technique. In the calculation of elasticity, the most commonly used model is Hertzian model. An overview of the Hertzian model with the assumptions and resulting limitations for the use on cells were discussed in detail. This study had been extended to find elastic modulus distribution of a single cell and compare the elastic modulus difference between living and dead cells. It showed that the center part of a cell was less stiff than the outer part; moreover, Young’s modulus increased from 8-20 kPa to 33-101 kPa after the cells died. Lastly, investigation on whether changes in the elastic modulus of the substrate affected HCECs was performed. The results indicated that the stiffness of HCECs increased as the substrate became stiffer.