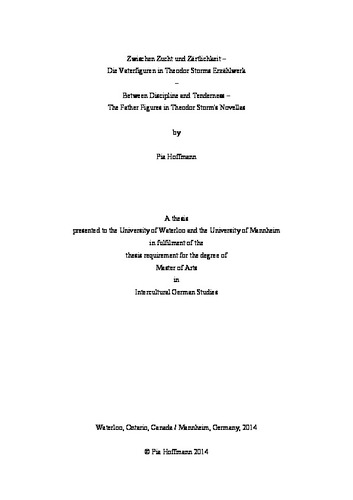 This paper analyzes and compares the various constructions of fatherhood in Theodor Storm’s later novellas Carsten Curator (1878), Hans und Heinz Kirch (1882) and Bötjer Basch (1887). More specifically, I focus on examining the fathers’ relationships with their sons and their entirely different approaches in bringing up their children, as well as their inner conflicts that may influence their chosen educational measures. As a basis for this analysis, the paper first provides an overview of discourses in the 19th century and addresses contemporary standards and ideals with respect to parental roles and education patterns. The analysis aims to illustrate that despite their varied disciplinary measures two of the three examined father figures fail miserably in preparing their sons for a responsible and independent adulthood and actively bring about the downfall of their children instead, whereby both Carsten Curator and Hans Kirch comply with the motif of the tragic father figure which often occurs in Storm’s later works. As will be shown, the father’s tragic role partly stems from an acutely strict incorporation of bourgeois norms, as well as a strong desire to maintain or increase social recognition, which lead to ambivalent feelings towards the son (both fathers alternate between love and hatred) that constantly burden the relationship between the two. Partly, the tragic fate of father and son at the end of the novella is caused by the ‘extreme’ child-rising methods chosen by the fathers who are not capable of seeing their destructiveness for the children’s development. Finally, I show an opposite example to the previous two by analyzing the depiction of a successful father figure in Bötjer Basch who is able to strike a balance in his approach of upbringing his son because his paternal love is not overshadowed by ambivalent feelings or by the dominant desire to fulfil social interests.