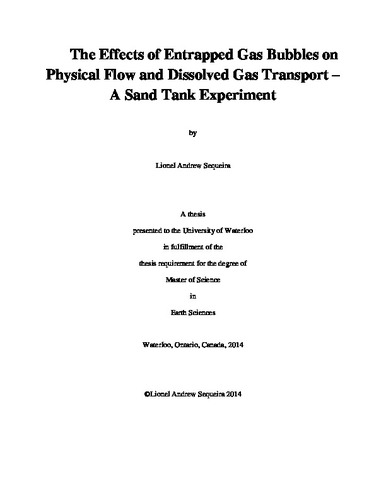 Groundwater tables undergo natural fluctuations due to a variety of processes like snow melt, rain infiltration, aquifer recharge/discharge and river stage fluctuations. Water-table fluctuations result in the entrapment of air bubbles below the water table which will affect the physical properties of the soil and the geochemistry of the groundwater. Oxygen in the air bubbles will dissolve into the groundwater and can be a source of dissolved oxygen. This thesis describes a series of experiments that were performed at a laboratory scale in a sand tank. The first phase of experiments involved measuring the change in water content and hydraulic conductivity of the sand under saturated and five water-table fluctuation scenarios. As the water-table fluctuation level increased, the amount of entrapped air increased, resulting in a decrease in water content and hydraulic conductivity of the zones with entrapped air. Bromide tracer tests were performed under fully saturated, 29 cm and 45 cm water-table fluctuations to identify physical properties like dispersivity and groundwater velocity. The tracer tests identified stratified velocity profiles across the sand tank such that the highest flow rate was deep at the inflow end while the lowest flow rate was at the shallow outflow end, resulting in preferential flow through the deep end of the sand tank. The second phase of experiments involved measuring the dissolved argon and oxygen concentrations in the sand tank under saturated, 29 cm and 45 cm water-table fluctuation scenarios. Due to limitations associated with the sampling procedure, diffusion could not be quantified as a process that contributed dissolved oxygen and argon to the groundwater in the sand tank. The 45 cm fluctuation experiment was run for 149 days to measure the change in dissolved-gas concentrations. The experimental results were simulated with MIN3P to provide some insight into the control mechanisms that govern gas-bubble dissolution and dissolved-gas depletion. The quantity of entrapped bubbles and the equilibration between the gaseous and aqueous phase are the main factors that control the depletion of dissolved-gas concentrations across the sand tank.