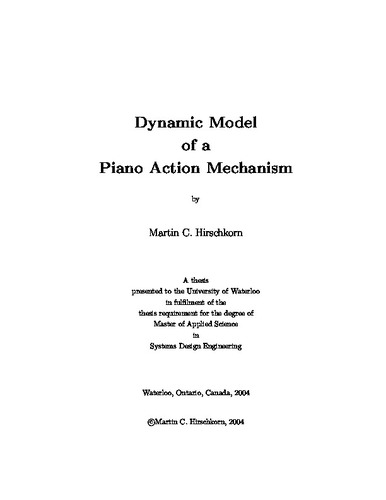 While some attempts have been made to model the behaviour of the grand piano action (the mechanism that translates a key press into a hammer striking a string), most researchers have reduced the system to a simple model with little relation to the components of a real action. While such models are useful for certain applications, they are not appropriate as design tools for piano makers, since the model parameters have little physical meaning and must be calibrated from the behaviour of a real action. A new model for a piano action is proposed in this thesis. The model treats each of the five main action components (key, whippen, jack, repetition lever, and hammer) as a rigid body. The action model also incorporates a contact model to determine the normal and friction forces at 13 locations between each of the contacting bodies. All parameters in the model are directly measured from the physical properties of individual action components, allowing the model to be used as a prototyping tool for actions that have not yet been built. To test whether the model can accurately predict the behaviour of a piano action, an experimental apparatus was built. Based around a keyboard from a Boston grand piano, the apparatus uses an electric motor to actuate the key, a load cell to measure applied force, and optical encoders and a high speed video camera to measure the positions of the bodies. The apparatus was found to produce highly repeatable, reliable measurements of the action. The behaviour of the action model was compared to the measurements from the experimental apparatus for several types of key blows from a pianist. A qualitative comparison showed that the model could very accurately reproduce the behaviour of a real action for high force blows. When the forces were lower, the behaviour of the action model was still reasonable, but some discrepancy from the experimental results could be seen. In order to reduce the discrepancy, it was recommended that certain improvements could be made to the action model. Rigid bodies, most importantly the key and hammer, should be replaced with flexible bodies. The normal contact model should be modified to account for the speed-independent behaviour of felt compression. Felt bushings that are modelled as perfect revolute joints should instead be modelled as flexible contact surfaces.