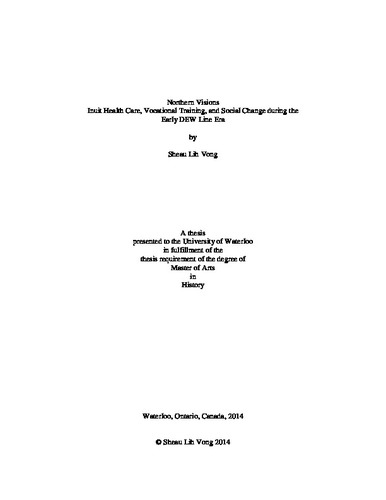 The history of government-Inuit relations is complex and multifaceted. Military megaprojects have played a significant role in the development of government-Inuit relations and in the development of the North socially, economically, and culturally. This thesis examines the influence of the construction of the Distant Early Warning (DEW) Line on Inuit life, with a specific focus on Inuit health care, vocational training, and social change. It challenges the simple narrative of the DEW Line as a revolutionary force, arguing that the DEW Line affected areas of Inuit life to varying degrees. It examines government motivations and intentions and the execution of policies, revealing how the federal government’s intentions were not always realized in practice and that the individuals involved in implementing policy played a significant role in shaping and defining development in the North.