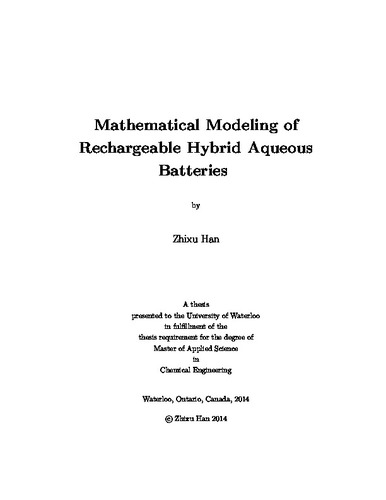 A rechargeable hybrid aqueous battery (ReHAB) system was recently developed by our research group. It has been improved via different experimental approaches, but nobody yet has tried to use mathematical modeling techniques to further understand the system. This thesis tries to investigate the ReHAB system using a few current modeling methods. The study is categorized into empirical level, electrochemical engineering level and atomistic level. At the empirical level, a battery is simply viewed as a whole system, which means detailed descriptions in terms of the cathode, anode or electrolyte are ignored. By using the historical experimental data, researchers can predict the future behavior of a battery regardless of its internal phenomena. They usually employ some general mathematical functions, such as polynomial, logarithmic, exponential or other nonlinear functions. Currently automatic curve fitting and predicting algorithms are commonly used in the battery management system, due to the advantage in coping with the system nonlinearity. The first study in this thesis implements a tracking method called particle filter method on the ReHAB experimental data. The basic math function in the simulation is an empirical formula between the battery capacity and the Coulombic efficiency. The study confirms this correlation in the ReHABs, and proves that particle filter method can be a good option in battery performance tracking and prediction. At the electrochemical engineering level, battery performance is simulated in the continuum models, by incorporating chemical or electrochemical reactions, transport phenomena or interfacial kinetics. This level of simulation can help observe battery electrodes in details. It is more accurate than the empirical level model, and more versatile in simulating various electrochemical problems. This thesis secondly focuses on the ReHAB system cathode and anode using finite element method, which is implemented in COMSOL Multiphysics. The study includes a design of battery system model, investigation of species distribution during cell operation, side-reaction effects and anode corrosion issues. The models designed at this level give consistent results compared with the experimental data, and illustrate some guidance for the potential experiments. At the atomistic level, molecular simulation can model the system dynamics via step-by-step computation. Stochastic method is an efficient molecular method to investigate electrochemical problems coupled with species diffusion and chemical reactions. Atomistic simulation commonly spends longer time, but it can be very accurate regarding the evolution of a dynamic physical system. The study at this level employs the classical stochastic method on the electrochemical deposition of Zn atoms. It is focused on the dendrite formation via implementing diffusion-limited aggregation techniques and the remaining metal ions by using stochastic simulation methods. The simulation schematically illustrates the overpotential influence on the dendrites and ion distribution at the metal surface. These findings prove that overpotential is an important factor and can also help further design of experiments.