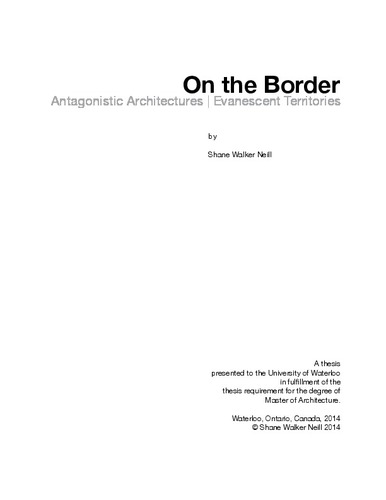 The Northern Pass | El Paso del Norte spills through the narrow Rio Grande Valley that separates the southern most extent of the Rocky Mountains from the Sierra Madres, dividing the bi-national metropolis of El Paso, Texas | Ciudad Juarez, Chihuahua. The two halves of this border landscape are interlaced in an intricate choreography of disparities that mine the strategic overlap of territories—physical territories: geological, ecological, built; contextual territories: historical, political, social, legal; and scalar territories: global, regional, local, etc. Regardless of the many forms of interdependence, an extensive, ineffective, and costly new border wall follows the pass, a symptom of an exclusionary and fearful national politic, blind to local realities and histories. Along this border sits the former ASARCO smelter, which for over a century acted as a manifold that tapped into the flow of resources passing through territorial overlaps: labour migration, trade and tariff dispensations, rail lines, to name a few. This thesis takes the remediation of the former ASARCO smelter as a testing ground on which to negotiate the generic global crisis of border politics and architectures against specific shared needs of the region. Skirting the wall and occupying the narrowest gap of the pass, the project approaches the smelter’s territory as an archive, wherein excavations become a strategy to point at anthropocene anxieties that are employed toward the subversion and reshaping of politics. Looking deeply into the territory, ecology, and history of the site, I seize upon two ecological flows that the apparatus of the border cannot impede, invasive species and subterranean aquifers, speculating on different ways in which the environment can be tuned to articulate a border crossing as a space of appearance between the two cities.