In the Shadows of the Sea: the Destruction and Recovery of Zeeland, the Netherlands, 1940-1948 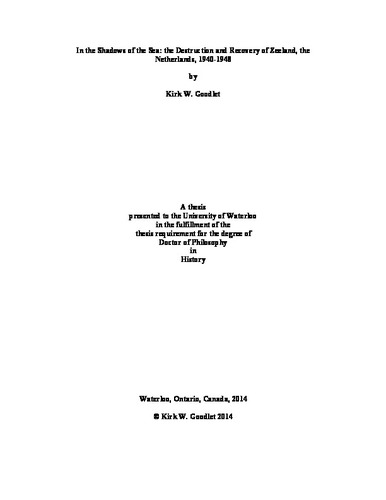 This study explores the wartime experiences of the rural Dutch province of Zeeland from the German invasion in May 1940 to 1948 by a close reading of Dutch newspapers as well as Dutch government and Allied sources. It seeks to contextualize the liberation of Zeeland in the autumn of 1944 by exploring both before and after the Second World War. It argues that the subdued reaction the Canadians received was a product of a very different understanding of the war for the citizens of Zeeland. Their experience was above all driven by geography, topography, confessionalism, as well as a very complex and unusual understanding of a war that dated back to 1914. Zeeland’s experience of neutrality during the First World War, as well as government responses to the post-war era and Depression of the 1930s created a precedent with which many would compare the experience of war a generation later. In many ways, the German occupation of Zeeland after May 1940 resembled the experience of neutrality after the outbreak of war in 1914. In both instances, the province was touched by war, but remained isolated by its economy, politics, and, culture. In that sense, the idea of liberation in the fall of 1944 had a very different meaning, especially with the Allies’ flooding and sinking of Walcheren Island in early October. That event brought an unprecedented level of destruction that framed the local response to liberation, which lasted well beyond the conventional end of the war in 1945.