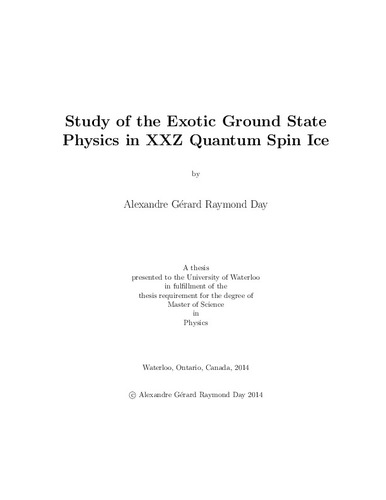 Three dimensional frustrated magnets realized in the rare-earth pyrochlores R_2B_2O_7, R=rare-earth ion, B transition metal ion) have attracted much interest since the discovery of spin ice in Ho_2Ti_2O_7 by Harris et al. Since then, a number of interesting phenomena in pyrochlore magnets have been observed and the interest in these systems, from an experimental and theoretical point of view, has nothing but increased. Perhaps the most appealing and unique possibility is that these systems may realize a quantum disordered phase; a so-called quantum spin ice. Theoretically, it has been predicted by Hermele et al. that a U(1) quantum spin liquid is realized in the XXZ quantum spin ice (with global U(1)xZ_2 symmetry) in the perturbative regime and more recently Savary and Balents have introduced a quantum rotor model with bosonic spinons coupled to $U(1)$ gauge fields to describe non-peturbatively the deconfined phase predicted. They studied an anisotropic quantum spin ice (QSI) model which corresponds to the XXZ QSI with an additional anisotropic coupling. They solved the quantum rotor model using a mean-field approximation combined with a large-N approximation and predicted the possibility of a U(1) liquid in addition to an exotic ferromagnetic phase. Further work by Lee et al. has addressed the more complicated fully frustrated XXZ quantum spin ice regime, where all components of the model are frustrated, by using some insights provided by the previous perturbative results. In this thesis, we will address the non-perturbative regime of the fully frustrated XXZ QSI beyond the simplest perturbative treatment. We will begin by mapping the quantum spin ice model to a compact U(1) gauge theory with deconfined electric and magnetic monopoles. Neglecting the interaction between the gapless photon excitation and the electric charges, we will study the matter sector with only electric charges, the so-called spinons. Building up on insights provided by high order degenerate perturbation theory calculations, we will construct some symmetric spin liquid ansatz for the static part of the gauge fields. The two novel spin liquids that we construct break time reversal symmetry and thus have a non-trivial chirality. In order to solve the matter sector of the theory and determine the stability of the deconfined phases, we will introduce a novel representation of a XY quantum rotor in terms of ``exclusive" bosons, a representation which is dynamically implemented in the dilute limit. We will benchmark this mapping in different ways by comparing our results with Quantum Monte Carlo simulations and exact diagonalization in some limiting cases. Using this mapping we will compute the region of stability of the U(1) liquid phase of XXZ QSI. Within this mapping we will reproduce qualitatively the results of previous work by finding only the so-called zero and \pi-flux U(1) liquids in the vicinity of the classical spin ice point, while improving greatly on the estimation of the exchange coupling at which the bosonic spinons condense to form a superfluid phase. In the fully frustrated XXZ QSI, we will provide evidence, using exact diagonalization of the quantum rotor model, that one of the chiral spin liquid may be realized in the strongly correlated and frustrated QSI regime, where all previous approximations break down.