A Sediment Budget of an Urban Creek in Toronto 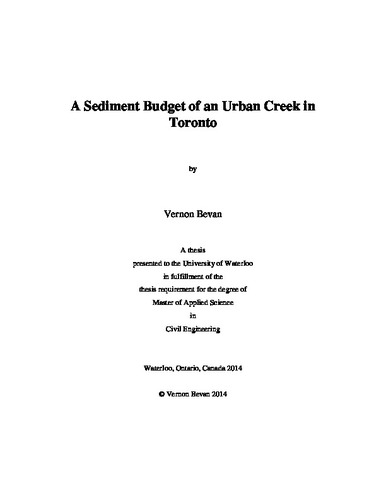 Wilket Creek is a second order stream located in Toronto, Ontario. Over the past decade, management efforts have intensified to protect infrastructure including walking paths, bridges, sanitary sewers and private property. As a result, the City of Toronto and the Toronto and Region Conservation Authority have undertaken projects to protect infrastructure by re-aligning the creek and hardening banks. Many of the projects have not been successful over the long term and efforts to protect infrastructure are ongoing. The goal of this research project has been to understand how sediment moves through Wilket Creek. This was accomplished by conducting a sediment budget which is an account of sediment inputs, outputs and storage in a fluvial or geomorphic system. Initially a morphological approach was employed to estimate volumetric sediment transport. The results contributed to a comprehensive sediment budget which assessed relative sediment input, output and storage components. As part of the study, efforts were undertaken to establish Wilket Creek as a long term field monitoring site for research on urbanization and sediment transport. Fieldwork was carried out over a two year period to assess input, output and storage terms of the sediment budget and estimate sediment transport. A comprehensive sediment budget identified bank erosion in the middle and lower reaches as the primary sediment inputs. A dam and bank storage in the lower area of the watershed were the main storage terms. Sediment outputs included the confluence with the West Don River, bank storage near the confluence and dredging behind a dam. Sediment transport calculations estimated that sediment output at the confluence was between 680 and 1,300 ton/yr/km2. Based on field measurements and observations, isolated locations of channel instability were identified in the middle reaches while a more general trend of channel adjustment was observed in the lower reaches upstream of the West Don River. Further research should concentrate on obtaining reliable discharge measurements, refining estimations of sediment budget terms and conducting additional analysis of historical aerial imagery. Finally, additional study should be undertaken to identify the causes of channel adjustment prior to initiating new restoration efforts.