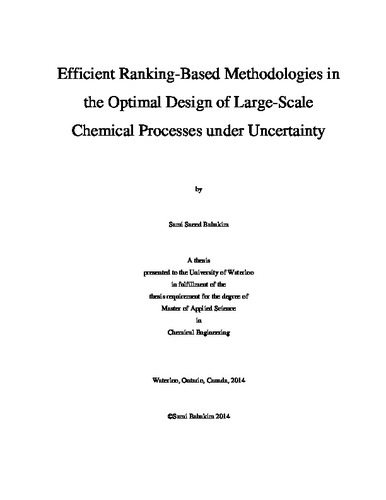 Chemical process design is still an active area of research since it largely determines the optimal and safe operation of a new process under various conditions. The design process involves a series of steps that aims to identify the most economically attractive design typically using steady-state optimization. However, optimal steady-state designs may fail to comply with the process constraints when the system under analysis is subject to uncertainties in the inputs (e.g. the composition of a reactant in a feedstream) or in the system’s parameters (e.g. the activation energy in a chemical reaction). This has motivated the development of systematic methods that explicitly account for uncertainty in optimal process design. In this work, a new efficient approach for the optimal design under uncertainty is presented. The key idea is to approximate the process constraint functions and outputs using Power Series Expansions (PSE)-based functions. A ranking-based approach is adopted where the user can assign priorities or probabilities of satisfaction for the different process constraints and process outputs considered in the analysis. The methodology was tested on a reactor-heat exchanger system, the Tennessee Eastman plant, which is an industrial benchmark process, and a post-combustion CO2 capture plant, which is a large-scale chemical plant that has recently gained attention and significance due to its potential to mitigate CO2 emissions from fossil-fired power plants. The results show that the present method is computationally attractive since the optimal process design is accomplished in shorter computational times when compared to the stochastic programming approach, which is the standard method used to address this type of problems. Furthermore, it has been shown that process dynamics play an important role while searching for the optimal process design of a system under uncertainty. Therefore, a stochastic-based simultaneous design and control methodology for the optimal design of chemical processes under uncertainty that incorporates an advanced model-based scheme such as Model Predictive Control (MPC) is also presented in this work. The key idea is to determine the time-dependent variability of the system that will be accounted for in the process design using a stochastic-based worst-case variability index. A case study of an actual wastewater treatment industrial plant has been used to test the proposed methodology. The MPC-based simultaneous design and control approach provided more economical designs when compared to a decentralized multi-loop PI control strategy, thus showing that this method is a practical approach to address the integration of design and control while using advanced model-based control strategies.