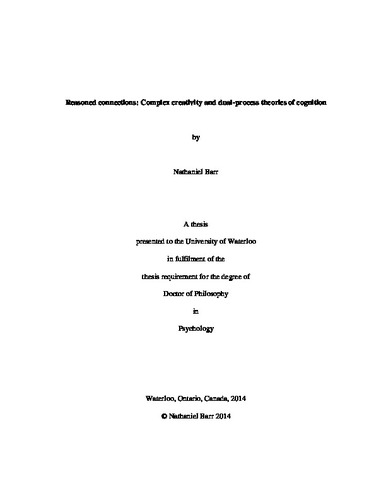 Creativity is one of the most imperative of all psychological constructs to study, for the implications of understanding creativity have immense bearing upon our future as a species. Understanding creativity can reveal not only basic mechanisms of our minds, but also afford insight as to how we have devised the ideas and artifacts that improve our lives and suggest how we can set the stage for further societal innovation and improvement. Despite the obvious imperative to arrive at a fuller understanding of creativity, the field is largely lacking in terms of a unifying theoretical orientation that can provide descriptive and prescriptive information regarding creative thinking. A particularly poorly understood and contentious issue within the study of creativity is the extent to which relatively more or less executive processing is beneficial to creative thinking. To explore this issue, I adopted a Dual-Process Theories (DPTs; Evans & Stanovich, 2013) perspective in which cognition is characterized by an interaction between autonomous (Type 1) and working memory dependent executive processing (Type 2). I conducted several studies that test whether relatively more or less Type 2 thinking leads to relatively more or less success in creative thinking at the state and trait levels. At both levels of analysis, I found that relatively more Type 2 processing afforded relatively more success in making creative connections that entail the unification of disparate elements. I qualify these results by showing that this relation does not hold for some other indices of creativity, and in so doing, distinguish what I call complex creativity from other sorts of divergent thought. In discussing my results, I describe the sub-processes that allow complex creative thinking to unfold over time and consider empirical and theoretical works from diverse areas that relate to this view. I situate the ability to make complex remote connections alongside other advanced higher-order thinking capabilities that are unique to humans and strongly suggest that to be creative, one must deploy our most advanced cognitive abilities.