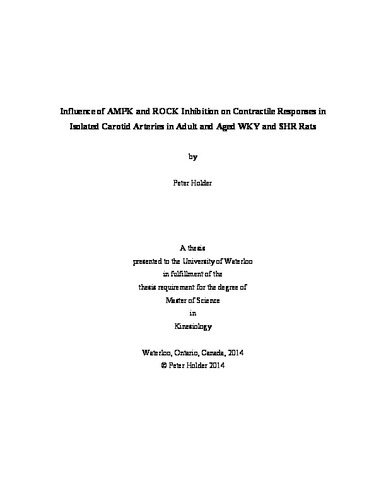 AMP-activated protein kinase (AMPK) is emerging as an important regulator of vascular function and is proven to affect vascular tone. Here we investigate how AMPK inhibition in arteries from both young and aged normotensive Wistar Kyoto (WKY) and spontaneously hypertensive (SHR) rats affects contraction in response to different receptor agonists. In study 1, isolated common carotid artery (CCA) segments (denuded of endothelium) from WKY and SHR were used to determine vasomotor dose-responses to the alpha-adrenergic agonist phenylephrine (PE: 10-9.0 - 10-4.5 M) and to the thromboxane-prostanoid receptor agonist U46619 (10-9.0 – 10-6.0 M) after incubation with no drug (CON); the AMPK inhibitor compound C (CC; 20 µM); the rho-assosiated protein kinase (ROCK) inhibitor Y27632 (1 µM); or, a combination of CC and Y27632 at the same concentration. PE contraction was suppressed in all groups for all treatment conditions (CC, Y, CC+Y; P<0.05) with the combination condition (CC + Y) being significantly greater than either individual drug effect in both WKY and SHR CCA, though this effect was not completely additive in all groups. Vasomotor responses of CCA segments exposed to U46619 under the same incubation conditions exhibited significant increase in EC50 when compared to the CON within their respective groups, but no significant differences were found in the maximum developed tension (MAX; P<0.05). The greatest differences were found between the receptor-mediated responses to contraction, with CCA segments of all groups having a higher sensitivity to the TPr agonist U46619 than to the alpha-adrenergic agonist PE. Fold increase in EC50 was significantly greater in groups subject to PE-induced contraction compared to the same responses in U46619 treated groups, with the greatest increase being present in the young WKY (CC+Y; 13.0 ±3.5 fold increase vs. CON). Vasomotor responses were relatively unaffected by hypertension and age. In study 2, the vasomotor constriction response to separate and combined AMPK and/or HMG-CoA reductase inhibition was measured via dose-response curves to PE. Four curves were generated: CON; CC (20 µM); Simvastatin (SIM; 5 µM); and, CC + SIM. PE contraction was suppressed in all groups for all treatment conditions (CC, SIM, CC+SIM; P<0.05) with the combination condition being significantly greater than either individual drug effect. The results suggest that AMPK may contribute to modulating the PE contraction response in denuded CCA via RhoA/ROCK-dependent and –independent mechanisms.