Advancements in the Elicitation and Aggregation of Private Information 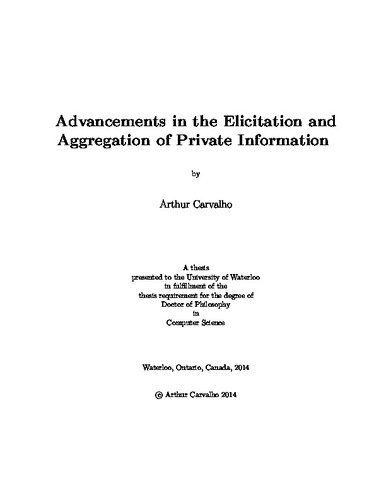 There are many situations where one might be interested in eliciting and aggregating the private information of a group of agents. For example, a recommendation system might suggest recommendations based on the aggregate opinions of a group of like-minded agents, or a decision maker might take a decision based on the aggregate forecasts from a group of experts. When agents are self-interested, they are not necessarily honest when reporting their private information. For example, agents who have a reputation to protect might tend to produce forecasts near the most likely group consensus, whereas agents who have a reputation to build might tend to overstate the probabilities of outcomes they feel will be understated in a possible consensus. Therefore, economic incentives are necessary to incentivize self-interested agents to honestly report their private information. Our first contribution in this thesis is a scoring method to induce honest reporting of an answer to a multiple-choice question. We formally show that, in the presence of social projection, one can induce honest reporting in this setting by comparing reported answers and rewarding agreements. Our experimental results show that the act of encouraging honest reporting through the proposed scoring method results in more accurate answers than when agents have no direct incentives for expressing their true answers. Our second contribution is about how to incentivize honest reporting when private information are subjective probabilities (beliefs). Proper scoring rules are traditional scoring methods that incentivize honest reporting of subjective probabilities, where the expected score received by an agent is maximized when that agent reports his true belief. An implicit assumption behind proper scoring rules is that agents are risk neutral. In an experiment involving proper scoring rules, we find that human beings fail to be risk neutral. We then start our discussion on how to adapt proper scoring rules to cumulative prospect theory, a modern theory of choice under uncertainty. We explain why a property called comonotonicity is a sufficient condition for proper scoring rules to be indeed proper under cumulative prospect theory. Moreover, we show how to construct a comonotonic proper scoring rule from any traditional proper scoring rule. We also propose a new approach that uses non-deterministic payments based on proper scoring rules to elicit an agent's true belief when the components that drive the agent's attitude towards uncertainty are unknown. After agents report their private information, there is still the question on how to aggregate the reported information. Our third contribution in this thesis is an empirical study on the influence of the number of agents on the quality of the aggregate information in a crowdsourcing setting. We find that both the expected error in the aggregate information as well as the risk of a poor combination of agents decrease as the number of agents increases. Moreover, we find that the top-performing agents are consistent across multiple tasks, whereas worst-performing agents tend to be inconsistent. Our final contribution in this thesis is a pooling method to aggregate reported beliefs. Intuitively, the proposed method works as if the agents were continuously updating their beliefs in order to accommodate the expertise of others. Each updated belief takes the form of a linear opinion pool, where the weight that an agent assigns to a peer's belief is inversely related to the distance between their beliefs. In other words, agents are assumed to prefer beliefs that are close to their own beliefs. We prove that such an updating process leads to consensus, i.e., the agents all converge towards the same belief. Further, we show that if risk-neutral agents are rewarded using the quadratic scoring rule, then the assumption that they prefer beliefs that are close to their own beliefs follows naturally. We empirically demonstrate the effectiveness of the proposed method using real-world data. In particular, the results of our experiment show that the proposed method outperforms the traditional unweighted average approach and another distance-based method when measured in terms of both overall accuracy and absolute error.

Arthur Carvalho (2014). Advancements in the Elicitation and Aggregation of Private Information. UWSpace. http://hdl.handle.net/10012/8730