Folly and Fire: A Space of Play in the Black Rock Desert 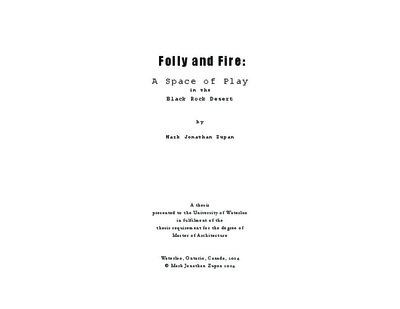 In Nevada’s Black Rock Desert, there is a city that appears for one week each year and then vanishes, leaving no trace of its existence except ruts in the dusty clay. The inhospitable, barren salt flat that the city is built upon is fraught with turbulent dust storms and scorching temperatures. But this does not stop participants from gathering there to build Black Rock City in order to host the Burning Man festival. Now in its twenty-eighth year, the festival is constructed and demolished by 70,000 people coming from around the globe to participate in this extraordinary ritual. Burning Man is a space of play that defies the stifling mores of Western civilization, and acts as a catalyst for an outpouring of creative collaboration. I attended the festival and its affiliated local events as a participant observer to document the stories that are shaping the architecture of this festival tradition. Through my research I learned about the role of play in fostering innate, creative instincts, and discovered the cathartic value of building and burning for those who are suffering. Burning Man’s creative rituals invite the redefinition of our modern myths, and embody new narratives in their architecture. This thesis tells the story of how I came to know a more compassionate, loving approach to making architecture through the festival and its community.