What Predicts Safety Behaviour? Examining the Phenomenology of Compulsive Washing 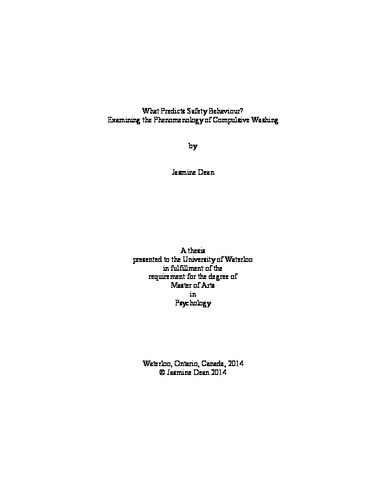 Leading models for understanding repetitive behaviour assert that concerns about the safety or well-being of oneself or others, combined with an overvalued sense of responsibility to protect oneself and others from harm, evoke anxiety (Rachman, 2002). This anxiety is not resolved until the person is able to feel certain that potential danger has been neutralized via some kind of action (Salkovskis, 1985; Rachman, 2002). We do not, however, have a good understanding of why that sense of certainty can be so elusive, at times leading to excessive repetitions of an action which are conducted at the expense of other tasks. Prominent explanations for this phenomenon suggest that beliefs such as distrust of memory, attention, or perception may influence parameters of safety behaviours (such as their duration) and that behaviour repetition can actually have a paradoxical effect on these beliefs, contributing to a self-perpetuating cycle. The purpose of the present study was to examine such factors as they relate to fears of contamination and repetitive or prolonged washing behaviours. In the current study we examined the basic phenomenology of prolonged hand-washing, as well as cognitive factors that might contribute to the development and persistence of repetitive or prolonged washing behaviours. Through the use of a naturalistic paradigm, we examined the nature of washing behaviours and beliefs of those who were low versus high in fears of contamination. Findings provide data on the basic phenomenology of washing behaviours following contact with a potential contaminant and indicate that those who are high in fears of contamination might hold dysfunctional beliefs, such as inflated estimates of harm, that contribute to prolonged washing behaviour. Furthermore, the findings of the present study suggest that washing behaviours themselves can contribute to increases in dysfunctional beliefs that might serve to perpetuate washing behaviours, such as a lack of confidence in sensory perception. These findings are considered within the theoretical context of cognitive-behavioural models of obsessive-compulsive disorder and clinical implications are discussed.