Microbial ecology of ammonia oxidation in the Grand River 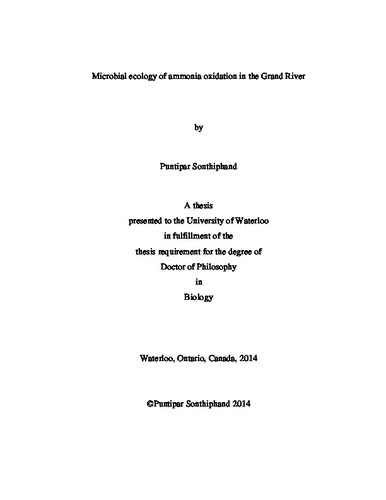 The Grand River is the largest catchment in Southern Ontario and is heavily impacted by the results of human activities, including wastewater effluent and agricultural and urban runoff. Ammonia oxidation is an important biogeochemical process for maintaining ecosystem health in impacted rivers because high ammonium concentrations are toxic to aquatic life and affect drinking water quality. In this thesis, I focus on the microorganisms involved in aerobic and anaerobic ammonia oxidation within a freshwater context. Aerobic ammonia oxidizing bacteria (AOB) and archaea (AOA) oxidize ammonium to nitrite under oxic conditions, whereas anaerobic ammonia-oxidizing (anammox) bacteria oxidize ammonium and reduce nitrite to produce N2 gas under anoxic conditions. Anammox bacteria play an important role in removing fixed N from both engineered and natural ecosystems, yet broad scale distributions of anammox bacterial have not yet been summarized. Chapter 2 investigates global distributions and diversity of anammox bacteria and explores factors that influence their biogeography. Combined bioinformatics and multivariate analyses demonstrates that an important factor influencing anammox bacterial distributions was salinity, in addition to selection based on natural and engineered ecosystems. In Chapter 3, I address a limitation of anammox surveys, which is the specificity of primers used to study environmental distributions of anammox bacteria. The published primers commonly used in anammox surveys were verified for their specificity and tested by multiple molecular approaches, including denaturing gradient gel electrophoresis (DGGE), quantitative PCR (qPCR), and cloning. The A438f/A684r primer set was specific for anammox bacterial detection in freshwater environments. Because anammox bacteria are not the only microorganisms capable of ammonia oxidation, Chapter 4 investigates the oxidation of ammonium to nitrite by AOB and AOA under different environmental conditions. Both sediment and water column samples were studied to assess the impact of anthropogenic inputs on in-river microbial communities, identifying key players removing ammonium from the Grand River. DGGE demonstrated that wastewater effluent impacted the in-river microbial community downstream. Together, qPCR and RT-qPCR indicated that AOB and anammox are important within river sediments, reflecting a possible nitrification-anammox coupled process. However, only AOB were implicated in water column ammonia oxidation. This study also demonstrates the importance of combined molecular and activity-based studies for disentangling molecular signatures of wastewater effluent from autochthonous prokaryotic communities. In order to confirm that molecular signals corresponded to metabolic activity, the differential nitrification inhibitors (ATU and PTIO) were used in Chapter 5 to confirm AOB activity within the Grand River, for both sediment and water column samples. Urea hydrolysis was tested in parallel to nitrification activity, examining this alternative source of ammonium for fuelling ammonia oxidation within the river. The results confirmed the dominant activity of AOB in both sediment and water column samples collected downstream in waters receiving wastewater effluent. Water column AOB likely hydrolyzed urea and used the resulting ammonium as an energy source. In Chapter 6, the full length of the Grand River was sampled to identify the composition of bacterial taxa, as revealed by next-generation sequencing and bioinformatics. The major bacterial taxa detected along the river were Proteobacteria, Bacteroidetes, and Actinobacteria. The wastewater effluents harbored unique taxa, including TM6 and GN02; these two were poorly represented in the river itself. Distance-specific relationships, from the head to the mouth of the river, including hydrodynamics (i.e., lake and dam effects), were key factors correlating with measured in-river microbial communities. Water chemistry (i.e., pH, DOC, NO3-) showed weak correlations with in-river bacterial distributions. Together, my research demonstrates the biogeography of anammox bacteria and niche partitioning of AOB, AOA, and anammox bacteria within the heterogeneous microbial community background of the Grand River. This thesis represents an important step forward toward understanding the roles of microbial nitrogen cycling within aquatic habitats, especially those impacted by anthropogenic activities.