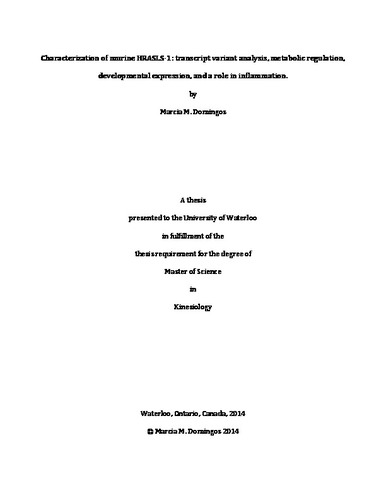 N-acylethanolamides (NAE) are involved in a variety of biological processes ranging from fat oxidation to inflammation mediation. Recently, the HRASLS family, a group of class II tumour suppressor proteins, have been identified and shown to have in vitro phospholipase as well as N-acyltransferase activity. HRASLS-1 functions predominantly as an N-acyltransferase to generate NAPE in animal cells that can be further metabolized into bioactive NAEs. Although this enzyme has been characterized with regards to its molecular function, no physiological role has been identified. In order to gain some insight into possible cellular or tissue functions for this enzyme, studies were conducted to analyze Hrasls-1 gene expression under changing nutritional states, during inflammation, and at different embryonic developmental time points. Two distinct Hrasls-1 transcripts that code for the same protein, a 0.8 kb and a 2.9 kb variant., were initially identified. Stability of the transcripts was tested by treating cultured BV2 microglial immunocytes with actinomycin D to arrest transcription, followed by qPCR analysis of Hrasls-1 mRNA levels. It was found that the Hrasls-1 0.8kb transcript variant has a shorter half-life than the 2.9 kb variant. Next, expression of the Hrasls-1 transcript variants was analyzed within mice that were non-fasted, fasted or re-fed. Hrasls-1 expression was determined in liver, kidney, white adipose tissue, heart, and brain. In the liver, kidney and white adipose, Hrasls-1 was induced by fasting, while in the heart and brain there was no significant induction during any of the different nutritional states. This work suggests a possible role for HRASLS-1 in regulation of the substrate oxidation between fasting and re-feeding. The regulation of Hrasls-1 and the generation of NAPE upon induction of inflammation in BV2 microglial immunocytes was testes. Hrasls-1 total levels were induced 24 h after activation of BV2 cells with lipopolysaccharide (LPS), and this was largely due to an increase in the 0.8 kb transcript variant. In line with these findings, there was an increase in the incorporation of [14C]palmitate into NAPE. Whole embryos were analyzed at different developmental stages (E10.5, 14.5 and 18.5), in order to characterize the regulation of Hrasls-1 in embryogenesis. It was found that the 2.9kb transcript variant showed significant modulation of expression throughout the measured time points. These results show regulation of Hrasls-1 gene expression under differing nutritional, developmental and inflammatory conditions, and are consistent with a role for modulation of NAPE synthesis in conditions where NAEs play a signaling role.