The Security of Simplified Trusted Relays 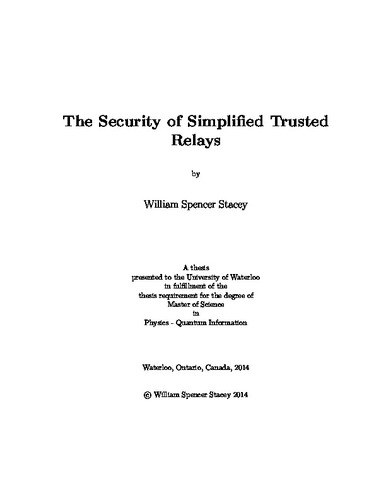 This thesis examines the security of performing quantum key distribution (QKD) with a simplified trusted relay (STR). The protocol carries out the quantum phase of a conventional trusted relay, however, reduces the required complexity of the nodes by carrying out an altered classical phase. Rather than announcing the parity of the final keys, the simplified trusted relay announces the parity of the keys before error correction and privacy amplification. As a result, the majority of the post-processing is left to the end users. Specifically, we examine the security of an STR protocol which carries out the quantum phase of the BB84 protocol. Through two different methods, we derive qubit key rates. For the first method, we require that the basis choice is equally weighted. Furthermore, we limit the relay to a single node. This proof has the benefit that it easily generalizes to an alternate protocol where a node may generate error correcting information. In the second security proof, we derive a key rate for an arbitrary number of nodes with an arbitrary basis weighting. We further extend our analysis to realistic scenarios in which the legitimate parties use weak coherent pulses to transmit signal states over a lossy channel. We provide a framework for generalizing decoy state methods to STR protocols.