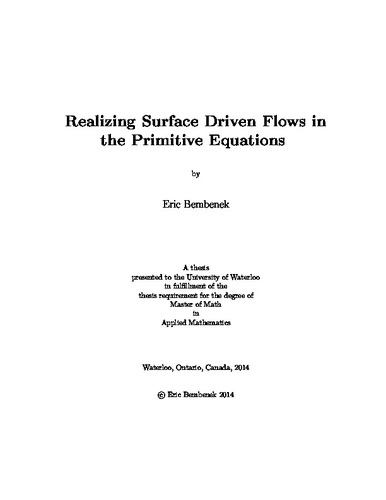 The surface quasi-geostrophic (SQG) model describes the evolution of buoyancy at vertical boundaries in the limit of infinitesimal Rossby number. In this regime, the quasi-geostrophic approximations are expected to hold. Numerical simulation of the SQG model often generate small-scale vortices which may have Rossby numbers that approach unity and may be outside the range of SQG. In this thesis we investigate the evolution of a surface trapped elliptical vortex in both the SQG model and the non-hydrostatic Boussinesq primitive equations (PE) which are better able to describe a wider range of oceanic dynamics. Thus, in the PE, we can vary the Rossby number in order to understand how the surface trapped vortex breaks down at the smaller-scale during its evolution. For small Rossby number, we confirm that the PE match the SQG prediction very well. For larger Rossby number however, we find that the models do not agree and different dynamics begin emerging in the PE. In particular, we find that the thin filament instability in the surface buoyancy field, common to SQG, begins to stabilize as the Rossby number increases and thus the emergence of the secondary small-scale vortices is halted. The core of the vortex spreads out and becomes much more uniform for larger Rossby number. The energy spectrum of the surface trapped vortex steepens from a power law of -5/3 to about -3 and the divergent energy grows as the Rossby number approaches unity. The growing divergent energy is an indication that inertia-gravity waves are generated in the simulation and we do indeed observe these in the vertical velocity field. We conclude that when the Rossby number of the surface trapped elliptical vortex is at least 0.05 new dynamics emerge and the PE must be used to attain an accurate description of the evolution of the flow.